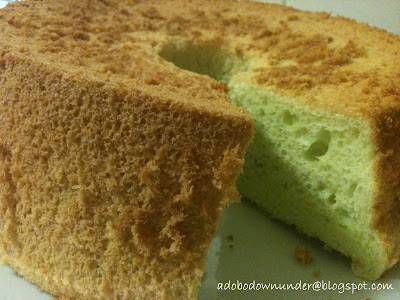 Mum's seeing green!  And so are you!

Mum’s got a confession to make.  Been obsessed lately with trying to look for a pandan chiffon cake recipe 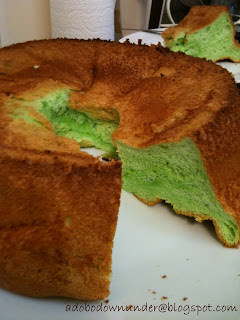 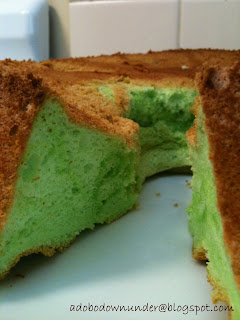 These are the overly luminous green cake.  The first try. 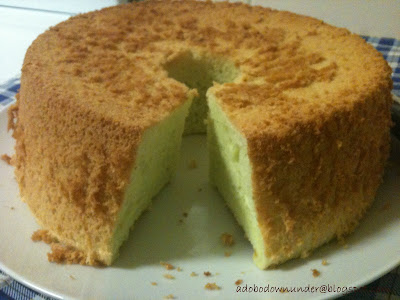 And this is the second try - lighter green and sponge cake as it should be!

Mum brought some of the’good’ cake to the office for a taste test!  And the verdict!  9/10! Almost perfect, but may need more of the pandan flavours in there.

Here is Christine’s Pandan Chiffon Cake
You will need an ungreased round tube pan with removable base.

2 tbsp pandan juice
(which is 10 leaves fresh or frozen pandan leaves, processed with 1 ½ tbsp water and strained with a muslin cloth) 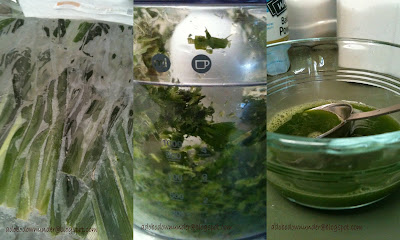 A few drops of pandan essence
(This was optional in Christine’s recipe but mum decided to use them.  You can tell how much I’ve used in both cakes, so don’t get too excited when using the essence. One drop and add as you continue to see the result you want) 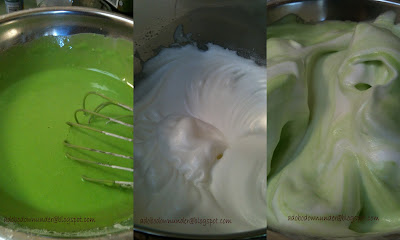 This is the egg yolk mixed with the pandan juice and essence (the first try as you can see by the bright vibrant colour), the egg whites mixture and then the two batters mixed together
1. Preheat oven to 170°C (338°F)
2. Beat the egg yolks with a balloon whisk and mix in 20 g of sugar.  Add coconut milk, pandan juice and a few drops of pandan paste/essence. Combine well.


4. Using a large clean bowl, beat in the egg whites with an electric mixer until bubbles form (its important not to wait for the egg whites to bubble, not foam,  to do the next step).  Add the cream of tartar.  After mixing well, add the 60g of sugar in three batches, about one-third at a time, and beat well between additions.  Continue to beat until stiff peaks form.


6. Pour into the un-greased cake pan  (Un-greased please!  Why?  Because this is a light sponge cake, you need that ungreased sides for the cake to rise and hold on to the pan) and bake in preheated oven for about 35-40 minutes.  After the first 15 minutes and you find your cake already brown, reduce heat to 150°C (320°F), and continue to bake until cooked through.  A skewer comes out clean when inserted in the middle.


7. Remove cake from oven and invert the pan immediately (on a plate).  Allow it to cool completely. 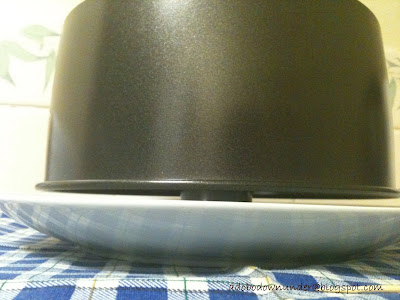 This was the all important step that Mum missed the first time!  IMPORTANT to turn the pan IMMEDIATELY!
This is an excellent sponge cake!  It can represent  the sweet side of the Filipino food culture, as influenced by the other Southeast Asian countries.  Next stop, to find that Ube (purple yam) Chiffon Cake recipe!
Here’s an important tip when baking!  Read and re-read the recipe and instructions before embarking head on. It usually avoids any disastrous results, more often than not.  Baking is truly an art and when you feel like baking, set the mood and prepare your mise-en-place with a calm mind set.  Baking after all, is almost always, therapeutic.  Aahh.  There’s something about the colour green that is truly calming. Just not too bright. 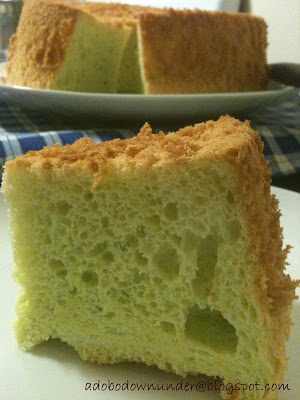