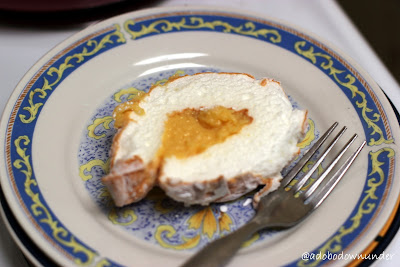 I have been craving for a variety of Filipino foods lately, and this sweet roll is one of them.  Recently, I made biko/sinukmani/kalamay which is a Filipino rice cake, recipe courtesy of Panlasang Pinoy.  And the weekend is not complete without another new recipe to try and this time it's the classic Brazo de Mercedes (translated would mean arm of Mercedes).    From the name alone, one can tell it is Spanish in origin, stemming from the early influence of Spaniards who came to the Philippines.  With little time and effort, I did find that it is similar to the Spanish rolled sponge cake called Brazo de Gitano or gypsy's arm.  Let's just say with Google backing me up, how the name Brazo de Mercedes came about, is a mystery at this point.  I can only assume it's a take off from the Spanish sponge cake but  progressed and took  a local route with the name of the first person who replicated the recipe.  She could be a farmer's wife who worked in the kitchen of some of the mansions occupied by Spanish government officials, or a Filipino cook stationed at a military post and replicated the recipe and named it after his wife.  It could be a result of some disastrous experiment to copy the Spanish cake and turned out differently. It could be......
At my grandmother's house in Candelaria Quezon, this is her cake as her name is Mercedes.   Not that she proclaimed ownership of the first ever meringue rolled cake ever.  It is that brazo which literally means arms, we used to touch Inay's arms when we were kids and called them brazo de Mercedes.  One of the many moments the grandchildren spent playing around with her and she'd lovingly obliged.
This is a sweet rolled meringue cake that can be bought from just about any bakeshop in the Philippines.  It is seriously sweet.  I tweaked the recipe a bit and added a teaspoon of lemon as I was a bit worried about the custard filling being too eggy which helped a bit, but I am considering making it 2 tsp the next time around. 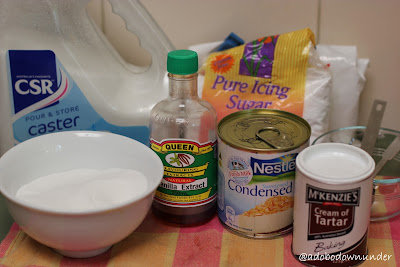 Separate the egg whites and yolks into two bowls.


Using a hand-held mixer or stand mixer with the balloon whisk, whip together the egg whites and cream of tartar, until frothy.
Add the caster sugar gradually and whip until you get soft peaks.
Grease or spray with canola oil a 9 x 16in rectangular baking pan or cookie sheet about 1-inch thick.   Spread the meringue evenly on the pan/tin using a spatula. (To create the embossed top, I used a serving fork). 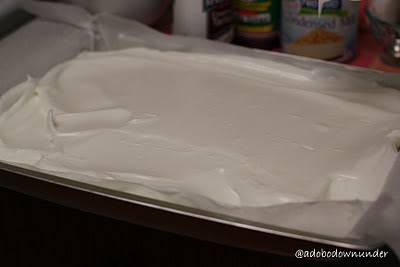 Bake in the pre-heated oven for 20-25 minutes until the top has turned a golden colour.  Set aside to cool - 10-15minutes. 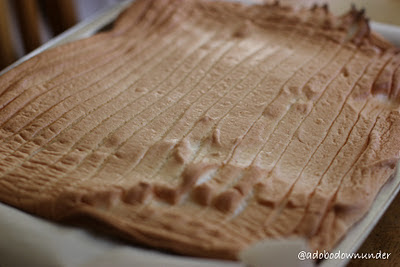 While the meringue is in the oven, prepare the custard filling.

Whisk the egg yolks and pour into a small sauce pan.  Add the condensed milk and lemon juice.  Stir continuously with a heat-proof spatula or wooden spoon over medium-low heat until thick (This may take 10-15 minutes or more. The consistency you're looking for here is like the canned creamed corn or cream style corn.  Thick and little bit lumpy.) 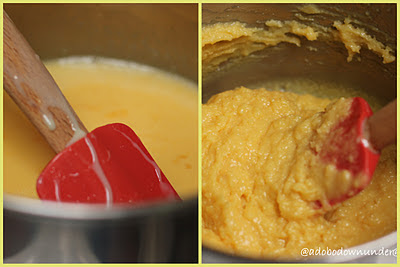 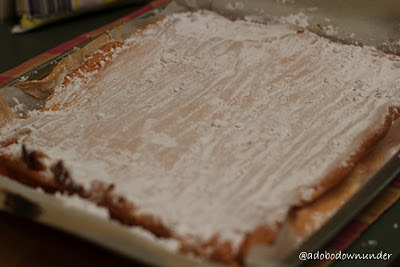 Cover this side of the meringue with some baking or parchment paper.  Place a similar size baking tin on top and invert so that the meringue is on the new pan. Gently peel off the baking paper from the cake.  You will then have the bottom of the meringue cake as the top. 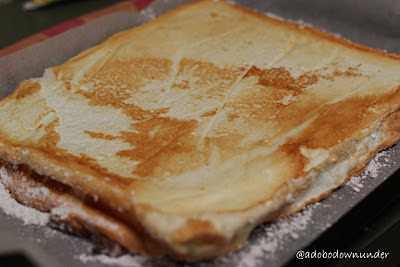 Spread the custard filling on the meringue/cake and spread evenly. 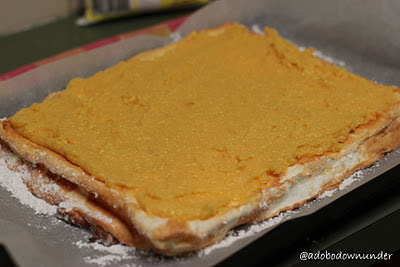 Starting from the side farthest from you, slowly and gently roll the meringue/cake using the baking/parchment paper in a wrapping motion.  Grab the opposite side baking paper and wrap like a roll.   (The baking paper here is only to help shape the rolled meringue cake.  You need TLC here as the meringue roll is very fragile and can crack which happened when I was rolling the cake, although it did not completely ruin the cake.)

Going back to .... ... could the cake have been named after a mysterious lover stemming from a forbidden love ala Rome and Juliet.   A love story!   Whatever the history is, this cake has its own unique sweet charm, literally. And I'm sure it was created out of love and passion and care. The soft meringue cake melts in your mouth and the custard complements the cake with its texture.  It is a loving reminder of days with Inay and the many afternoon tea moments spent with family and friends back in the Philippines.
As I have never ever tried making rolled cake before, this was a great first step to start experimenting on jelly rolls such as the original Spanish Brazo de Gitano.  Or the Swiss roll with cointreau mascarpone from ex Masterchef contestant Billy Law.   But before I move onto Spain or Swiss cuisines, I'm still learning a lot from my own heritage, so for now, those are bookmarked for future posts.  I'm thinking the Filipino mamon or sponge cupcakes will be next.
Another weekend has whooshed by and onwards to warmer days and blue skies in Sydney as summer approaches!  Keep it sweet and let the love flow freely folks! And by the way, get on with the Christmas shopping already, will you?!