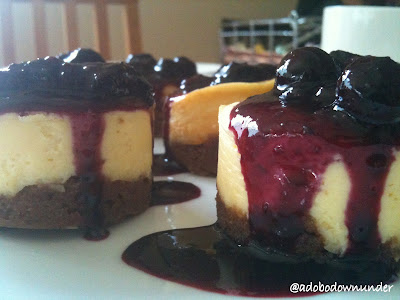 It has been busy for my new Chicago Metallic Mini Cheesecake Pans since they arrived just before the long weekend.  So far, it has produced 48 mini cheesecakes in a span of 3 days.  As it was too much cheesecakes to consume, I decided to invite some friends over as part of road-testing the pans.  I was not surprised the cheesecakes turned out well - two varieties of mini cheesecakes over the weekend. Who wouldn't want to share in a treat as a finish to the NSW long weekend?
I've used my previous recipe post for the Oreo no-bake mini cheesecake, but had extra base and cake so made an extra one using a Willow mini pie tin.   For the blueberry topped cheesecake, I used the recipe printed on the mini pan's box.  It was simple and quick.  The blueberry topping was from the recipe of the NY Cheesecake I posted awhile back.
To make these mini cheesecakes I used:
1 - 250g pack Philadelphia Cream Cheese
1 egg
1 tsp vanilla extract
1/4 cup caster sugar
60ml thickened cream
(something I added in the second batch as the first one was a bit too thick)
1 cup grounded graham crackers
(recipe called for ground nuts but we used graham crackers.  I bought heaps when we made the strawberry ice-box cake)
90g melted butter
3 tbsp caster sugar
Pre heat oven to 175* C. Lightly grease the pans or use non stick spray.
Mix the ground graham crackers (or nuts if you're using) with the melted butter and sugar.  Scoop 1 to 1 and 1/2 tbsp evenly among the 12 cups and press with a small dessert spoon or with your thumb.  The crumbs should cover about 1/3 up the sides of the cups.
Using a hand-held mixer of stand mixer, cream the cheese and sugar together.  Add the egg, vanilla and thicken cream and mix until all together.
Scoop 1 tbsp each of the cheesecake batter into the cups.
Bake for 14-15 minutes.
(I checked the pan after 14 minutes and found the cake still a bit wobbly.  It too another 2 minutes to cook the cake.  But still, it should depend on the oven you're using.)
Remove from oven and place on a rack and cool for 20 minutes.
Serve with your favourite topping!
We took advantage of the blueberries which were on sale at the fruit shops for $3 a punnet!  I can't wait to try on other toppings with these pans! 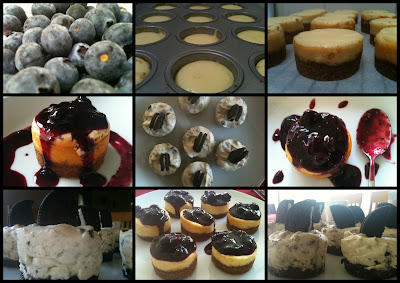 Thanks to Bakers Royal which I found though Pinterest, for pointing me to the Chicago Metallic Mini Cheesecake Pans.  While my Oreo cheesecakes don't look as attractive, I think I did justice to the cheesecakes with the taste! 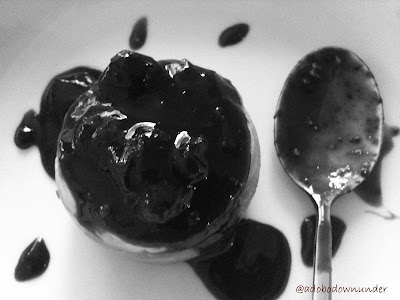 PS - The B&W photo above is making its way to Week 13 of The Well-Seasoned Cook's Black and White Wednesday!