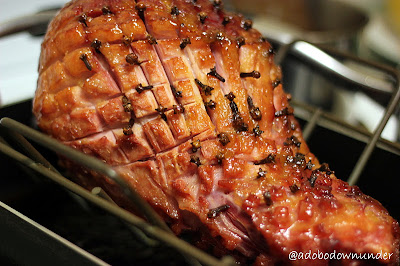 Please excuse the over excitement over a simple glazed ham.  It is something traditional and ho-hum to some, but a first attempt in our little corner.  Over the years, oven baked ham that grazed our table were usually gifts or store bought.  It just seems like something too daunting to take on, like a massive DIY project.  But like all dreams and goals and things that you need to tick off your list, taking the first step and just getting on with it is the best antidote to the curiosity that eventually would have killed the cat.  And just like a DIY project, this one is massive!  7.8 kilograms of glazed pork ham bliss. Well, if you're into this kind of thing.
To make this glorious looking ham goodness, friends shared their recipes.  First stop, carefully take skin/fat off the ham.  Score diamonds on the ham then soak overnight in brine made of:
4 liters pineapple juice
1 cup brown sugar
1 440g can crushed pineapple
1 tbsp cloves
* Use a big deep plastic bowl or container.  DO NOT USE aluminum or stainless container as the acid will ruin your pot.
* The ham should be soaked/submerged all the day.  If you don't have a deep container, make sure to turn the ham every hour or so to make sure other parts of the ham are soaked as well.
The next day, when ready to bake/roast, preheat the oven 170*C and prepare your roasting dish/pan.
Pat dry the ham and prepare ingredients for glaze.
600g jar apricot conserve or jam
1 can 440g crushed pineapple
1 cup brown (half cup for rubbing, half cup for the glaze)
1/2 cup of the brine
1 cinnamon quill
handful of cloves for studs
Using a medium sized pot or saucepan, gently simmer the apricot jam, crushed pineapple, brown sugar, brine and cinnamon quill over low heat until the mixture has reduced and has a sticky thick consistency.
Rub brown sugar over the ham and stud the diamond scores with the cloves.
Using a pastry brush, glaze the ham with the apricot mixture in a patting motion, making sure all the sides and the diamond scores are covered.  Save some of the glaze for basting.
Bake in the preheated oven for 2 hours, glazing every half hour but making sure ham is not getting burned (cover with aluminum foil, if this happens). 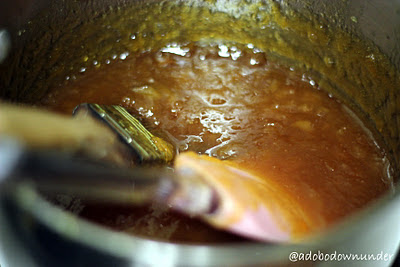 This ham was part of our NYE feast and coming out of the oven, it raved Oohs and Aahs with just its looks!  Served with some of the left over glaze on the side, the ham took on the new year by storm.  Some of it made its way into some pasta carbonara and many omelette dishes well into the week.
Does it have to be Christmas or New Year's eve for ham to graze the dinner table?  With its size and effort, I guess its worth it.  A smaller and leaner portion can be made with a simple glaze and kept in the fridge for those weekday sandwiches, weekend breakfasts, toasted and topped on some salad, etc. etc.  So if  making glazed at home is on your to do list, don't wait for the  next big holiday.  Make it now and invite some friends over!  A ham is definitely worth making, and sharing! 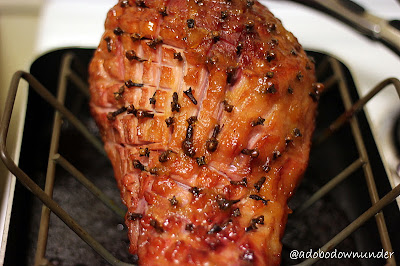