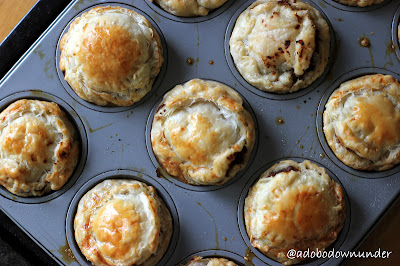 Half way through to Term1 and the girls have settled in calmly at school. B who is now in Year 9 has taken electives in school that somehow (as a mum, I hope) would imbibe a new kind of interest, away from social networking and other non mind stimulating endeavours. Let’s see how and where Commerce and Visual Arts will take her this year. And for the first time, the NOW big girls will sit in separate Year 3 classes. Well somewhat. As two (A and S) are together in one class and (J) is the one separated. And half way thru, we can already see slight changes in their confidence and maturity.
And on the home front, we’ve done the most exciting step! We moved house! Not at all that grand in terms of distance (a few short blocks away), but still as crazy and overwhelming. Clearly not your ordinary kind of start to the year. But we’re just as glad and feel blessed that we found the perfect place. So we have been busy for what seemed like forever – from searching for the rental house, to inspections, to packing, cleaning, packing, cleaning, packing, cleaning, and now, cleaning, unpacking, cleaning unpacking, cleaning, unpacking. No complaints here. Just feelings of relief. Exhausting and crazy, but relieved. And so, for weeks now, with the start of the school year and the moving thing going on, writing/blogging has taken a back seat. Not that anyone actually notices, I know! Cooking never stops though. It’s a daily routine and taking photos of what we eat at home takes centre stage online – getting addicted with instagram much. Photos to upload and drafts to edit are patiently waiting for attention.
But before all these excitement was a meat pie attempt at home. For the new school year, we made some home made meat pies to pack in those lunch boxes. This recipe is inspired by the doyenne of the Australian culinary scene, Margaret Fulton - beef and burgundy pie recipe from the Margaret Fulton’s Encyclopaedia of Food and Cookery. We’ve managed to ruin our pastry from scratch and used store bought puff pastry, so this version became one easy recipe to follow.
1k beef chuck steak, cut into cubes

Preheat oven to 150*C.
In a large bowl, mix together the flour and cayenne pepper.  Dip the beef cubes into the flour mixture and turn to coat.  (This eliminates the process of patting dry the meat pieces in order to brown them properly.  The flour coating also acts as a thickener in the dish during the finishing stages).
Using a large heavy-based saucepan or cast iron pot on medium heat, add oil and butter.
Stir in the diced bacon and cook until golden and crisp.  Remove from pan and set aside.
In the same pan, brown the coated beef cubes a few pieces at a time, making sure all sides are browned, then aside.
Add the onions into the pan/pot and cook until soft, then add the mushroom.
Add back the browned beef cubes and bacon and continue cooking.
Add the thyme, wine and stock to deglaze the pot/pan.
Cover and place in the preheated oven and cook for 1-2hours or until meat is tender.
Cool completely. 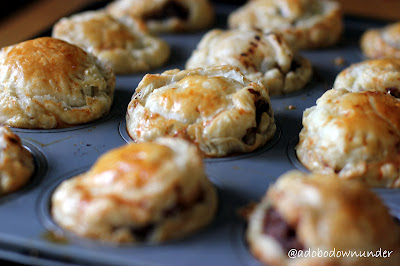 We prepared the filling a day early to let it cool down. Using a fork, the meat was coarsely shredded and set aside while the pastry thaws from the freezer section of the supermarket. Half cup muffin tins were used to prepare the meat pie versions, but we opted the easier route after one tray and wrapped the fillings in ala calzone-empanada versions. The pies are finished off with some egg wash, baked in a 160°degrees pre-heated oven until crisp and golden. About 30-40minutes. 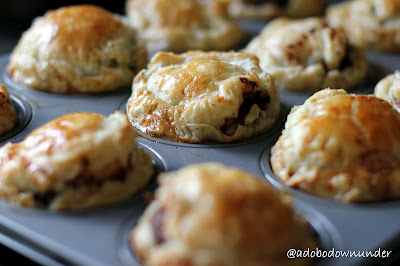 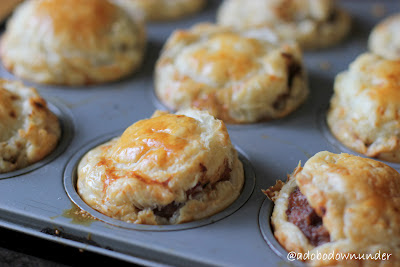 These pies were wrapped with love and into the girls lunch boxes on their first day of school. Even hubby enjoyed and endorsed these at work. These are an absolute delight to eat! Seriously good melt in the mouth flavours wrapped in flaky savoury pastry. The little empanada varieties looked so great and bite sized, we’re making them for the next call-out for school morning tea!

Yield? Not quite sure.. but let me see. We made 12 pieces using the half-cup muffin tins, about 5 large calzone types, and about 24 cocktail sized empanadas. The filling plus 20 sheets of store-bought puff pastry could yield an approximate 36 using standard ½-cup muffin tins. Approximately. 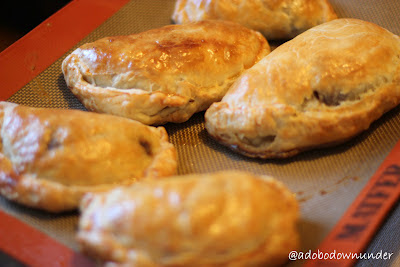 PS – as I haven’t written for like weeks now, there was a kind of anxiety logging in to blogger. You know that kind when you know you have to face something, but you’re dreading it because of the enormity of the task? Well, it felt was like that. And to think this is just a personal. Ay-ay-ay!
Posted by annabanana at 7:23:00 pm