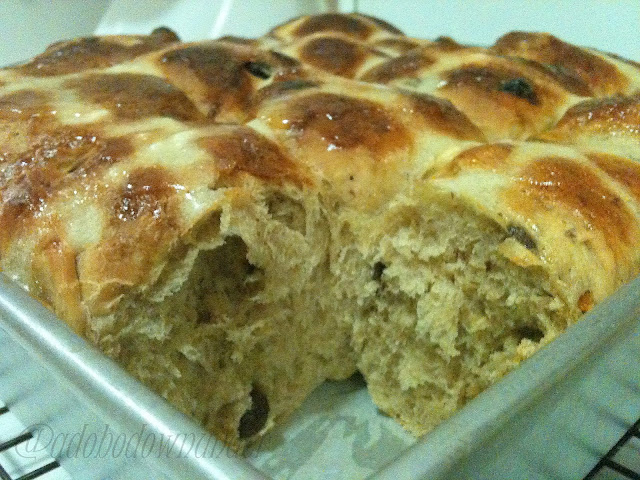 I'm a stickler for tradition.  As much as possible, I'd like to create them and my family (hubby and kids) are in for the money. I'm talking about tradition which we'd all agree we'd like to keep and grow with, alongside those that hubby and me have learned from when/where we grew up.  Its a bit of a challenge when you move overseas and you're left to you own devices to create your own little circle and keeping to traditions you grew up with is part of the challenge.  In the absence of elderly folks, its up to us (hubby and me) as first generation migrants to step up to the challenge and make sure that our girls grow up, not just assimilating into the Australian way of life, but also keeping to the traditions and culture of Filipinos.

Lent always brings  me back to this - traditions and keeping them. Growing up in a predominantly Catholic environment where generally everyone celebrates Lent and the Holy Week (from Maundy Thursday to Easter Sunday) with rituals and celebrations, its difficult to replicate the same in an environment that is multi-denomination.   For one, churches in the Philippines are open 24hours during this time where people are encouraged to come in and do their own prayers and offerings.  In some other parts of the country, there are rituals re-enacting Christ carrying the cross up to the crucifixion (Warning - some people may be put off watching these footage - something I've never seen in person).  Growing up, our Holy Week would begin with prayers and songs offered as part of the "Pabasa" at the local church, doing stations of the cross with my mom, a late evening mass on Good Friday (where the priests would reenact the washing of the apostle's feet), and a dawn procession on Easter, then mass in the morning.   When we were younger, Easter egg hunt at home was a luxury and eventually stopped when we grew older.  As a teenager then, this was such a feat that I dreaded, to be honest.  But now, I wish I could give the same experience to my girls. 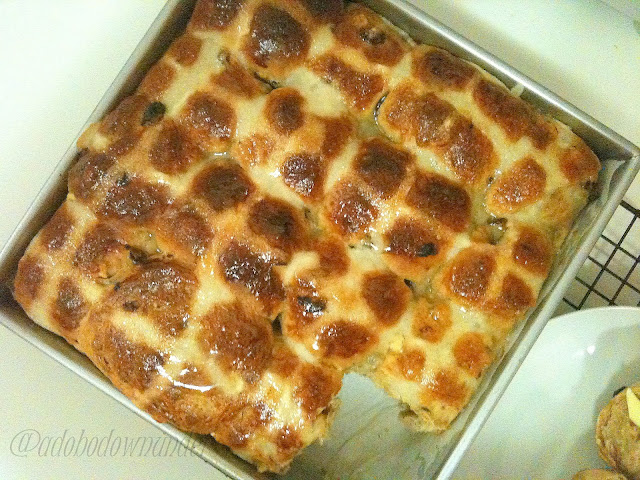 So far, we have managed to stick to a few during Easter - , drive around the local suburbs to visit 7 different churches to offer prayers on Good Friday or Black Saturday (called Bisita Iglesia in the Philippines, this entailed doing the stations of the cross in each church visited) mass at the local church on Easter Sunday, potluck lunch at home and hubby's life-changing Easter egg hunt in the backyard.

Now, Filipinos don't have Hot Cross Buns during Lent, and I've never in my life before moving to Australia knew of these deliciousness.  In the past, we've always bought the famous-bakeshop varieties, or the supermarket-brand ones.  But last year, it changed.  Call it a new tradition, but when I saw this from Bron Marshall's IG feed, there was this calling to make them. I love how Bron shared her family's tradition through her recipe.  Hot. Cross. Buns.  I've made these many times now and everyone who ever tasted them loved them - and gave their definiltey-better-than-any-other-hot-cross-buns-they've-ever-tasted-2-thumbs-up.  Making your own hot cross buns at home is definilty worth the time and the effort.

In a medium sized bowl, dissolve the brown sugar in the warm water.  Sprinkle the dry yeast and set aside.  The sugar will activate the yeast and this will become bubbly and foamy.

In a large bowl sift the bread flour, milk powder, ground spices and salt.  Then add the dried fruits.

Attach the dough hook to your stand mixer.

Add the yeast mixture to the flour mixture, then pour in the melted butter.  Mix until the dough is smooth and comes off the sides of the bowl.
(If using hands, knead the dough for 8-10 minutes until smooth).

Cover the bowl with cling-wrap and set aside until double in size.

Cut the dough into 55-60g and shape into balls.

Cover with the tray with a damp tea towel and place in a warm spot and let rise for 1 hour or more.

Prepare your piping paste - combine the extra flour and water and mix to a piping texture and consistency.  Transfer to a piping bag and set aside.

Once the buns are ready (buns have risen after an hour), brush the tops with the egg wash.

Pipe lines across the buns to form crosses on the tops using your flour-paste mixture.

Bake in the preheated oven for 25 minutes.

Serve immediately with a slather of butter.  Or keep some for tomorrow's tea. 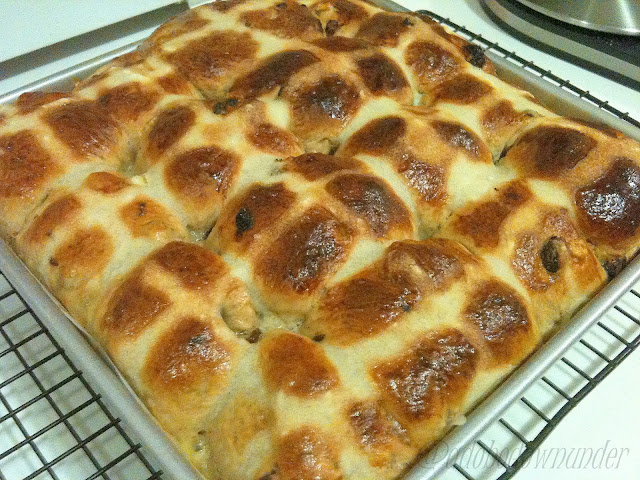 How about you?  Do you have Lenten/Easter traditions you grew up and keep to this day?  What foods do you usually serve on this holy season?