This week is another chicken dish, but one that drives close to home - it is an adobo dish.  And involves a favourite of mine - chicken livers.  It's not one though that I always make at home as I'm the only person who eats it.  When my parents were visiting last month, we made this as my father is just a huge fan as I am.  I guess being of the offal category, chicken livers take a bit of effort to like, to love even.  Some get squeamish at the thought, and it was one of the reasons why I never thought of sharing the recipe in the blog.   It is quite an effort to make the photos attractive, so I have discounted the photos from the preparation to the cooking.  Even the cooked dish was not likeable no matter what angle.  So I thought I'd reinvent it a bit and make it pretty.

And I'm sharing the recipe as guest post at Debra's blog The Saffron Girl.

I first met (virtually) Debra through Instragram, following each other's food creations and me drooling at her travel photos.  I now stalk her on Facebook , Pinterest and Twitter. Hahaha!  Debra posts a lot of paleo and gluten-free dishes and I admire the passion she puts into each dish - she does a lot of research and tweaking and reinventing to adapt to her readers.

I was first drawn to Debra's blog for the Spanish dishes which she makes as ode to her roots.  Why am I drawn to Spanish dishes?  Well, its because (and I have mentioned this in many many posts), it is my dream to travel to Spain and eat and drink and eat and drink and ......  Where did this come from?  I supposed from the history of the Philippines where I grew up and probably because I believe I may be a Spanish senorita in my previous life.  But that's just me.

When Debra first asked if I'm interested to do a guest post, I was filled with excitement and nervous fear.  As it's something I have never done before, it was kind of daunting like sitting for a finals exam.  It took awhile for this to materialise, but it was actually fun and every bit worth it.

So, hop on down to The Saffron Girl and have a taste of this classic Filipino dish.  Reinvented and prepared for Debra's readers. 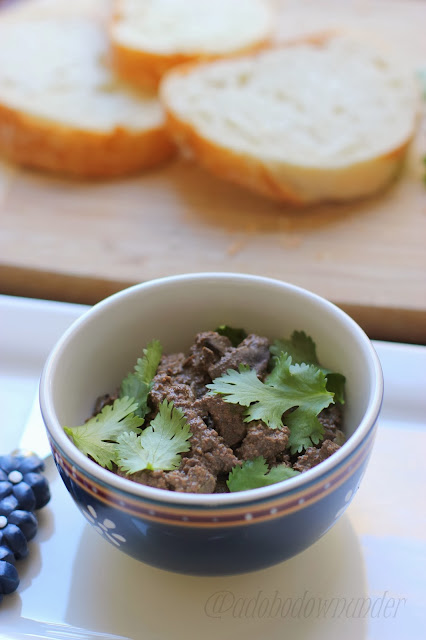