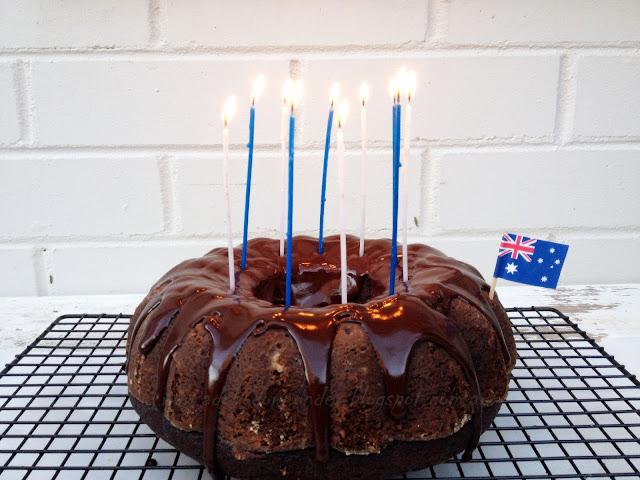 It’s been awhile since I’ve written a post.  Not that anyone notices.  With all the thousands of fabulous food blogs around.  But I’d like to keep writing as this keeps me creative.  Cooking.  Baking. Taking photos.  Then writing.  It’s a cliché, but it is therapeutic to write.  To compose one’s ideas on paper, or in blogging’s case tap, tap, tapping on the computer. Sometimes, well most times, ideas elude me.   The girls have been getting a lot of writing tasks from school and it helps that I am able to assist them with writing ideas.  Even though they don’t end up in the blog, the writing ends up somewhere.  At school.  To be graded for composition, narrative/persuasive texts, etc.  At least here its not being judged.  No grading.  Just open ended talk about generally anything under the Australian sun.  So what’s up with adobo down under....

The year has swooshed by so quickly.  And we are on the second half of 2015 already!  The first of July to be exact.

On the home front, the girls are onto their milestone years.  Big sister is in Year12 – taking HSC (Australian equivalent to SAT or NCEE) this year, just turned 18, and currently in NYC (and LA) for a performing arts tour at school.  The younger girls are in Year 6, just turned 12 and taking on many tasks at school mostly related to arts and crafts, have done several high school applications and one interview with a school principal.  It’s an exciting and busy year.  So the first half of blogging has been set aside, but there have been lots of cooking and cakes baked so far.

Recently  we also celebrated our 10th year anniversary in Australia.  I can’t believe it has been a decade.  It seems like only yesterday when we were at Sydney Kingsford International Airport, armed with 6 luggages and 2 massive boxes full of personal effects, memories and other stuff we wanted to hang on to from the past, as we started our new life in Australia.  A decade has passed and we have thrown some of those old stuff, acquired new ones, and have been creating new memories since we came.  It has been amazing.  Like everything that life is, there have been many down moments but the positives always overcome the negatives.

So a milestone deserves a cake.  And to celebrate we made this cake.  A chocolate sour cream bundt cake.  It's a great cake for celebrations.  Or if you just want cake, really. 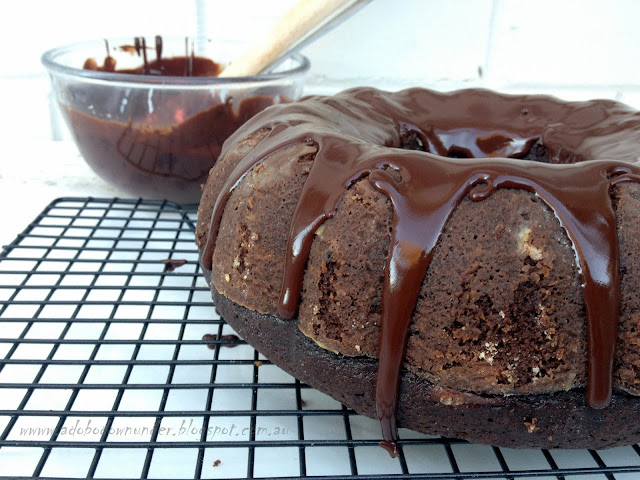 225 g butter (I used salted), plus extra for greasing the pan

2 cups flour, plus extra for dusting the pan

Preheat oven to 175*C.  Butter and flour the pan the bundt pan

In a small saucepan, mix together the butter, cocoa powder, salt, and water and place of medium heat, stirring with a spatula until completely melted.  Remove from heat and set aside

In a large mixing bowl, combine flour, sugar and baking soda with a spatula or whisk.  Add half the melted butter mixture and stir until thoroughly blended.

Add eggs one a time, stirring until completely incorporated before adding additional egg.

Fold in the sour cream and vanilla and stir until smooth.

Pour the batter into the prepared pan and bake in preheated oven for 40-45 minutes or until a skewer inserted comes out clean.

Let the cake completely cook before inverting onto a rack.

Place the chocolates in a bowl and set aside.

Heat the cream in a small saucepan until hot (but not boiling). Pour into the bowl of chocolates and stir with a spatula until chocolate is melted.

Add the butter and continue to stir until you have a smooth.

Drizzle the glaze onto the cooled cake, letting it run down the sides.
(Just like below. Extreme control measures needed to restrain from licking the bowl and spoon) 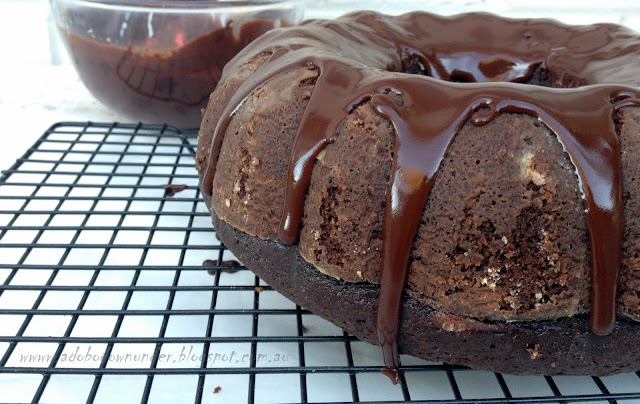 And let me just say, Australia you have been amazing.  We came here, fell in love and more than happy to call you home.