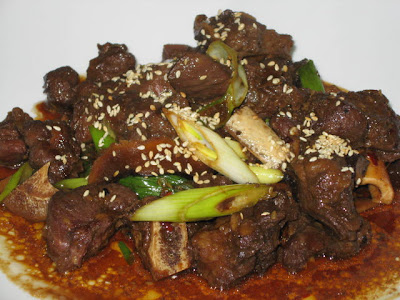 There is a counter kiosk in almost all mall fastfood centres in Manila called "Kimchi". It specializes in Korean dishes and the Beef Spareribs is one of our favourites. It does take a little bit of effort to prepare, but the results are guaranteed satisfaction at the dinner table, at least for the grown ups.

This recipe was taken from the Filipino Kitchen Library, Asian Cooking by Aileen Jaraza, Christina Aquino and Herbert Jaraza. It is one of the books I took with me to Sydney, as a reference for dishes that will be missed.


1k beef spareribs, cut into chunks (I used only about 600g)

4 pcs Chinese mushroom (or in this case, I used what I had in the pantry - Shitake mushrooms)


Score the meaty parts of the ribs and rub all over with sugar. Place in a bowl.

In a small bowl, mix the soy sauce, sesame oil, garlic and crushed sesame seeds. Marinate the beef pieces in the soy sauce mixture for at least 1 hour.

Soak the dried Chinese mushrooms in the water for at least 30 minutes. Drain. Reserve the liquid. Slice and mushrooms and set aside.

Pour off the marinade from the beef pieces and reserve marinade.

In a wok and without cooking oil, sear meat pieces on all sides to seal in flavour. Add marinade and liquid from mushroom. Bring to a boil, then lower flame to simmering and cook covered for 1 hour or until the beef is tender.


The following are part of the recipe but I chose not to include for plain reasons - I didn't have time to buy these:


Remove the cover and add the mushrooms, scallions and water chestnuts.


Cook for a further 30 minutes until much of the liquid has evaporated.


Season with salt and pepper.


Transfer to a serving platter and serve with boiled rice.

For my version, I added some chilli flakes at the last minute. And then added some chopped shallots and some sprinkle of sesame seeds when served. Plus a side dish of sauteed bean sprouts and a bowl of rice. 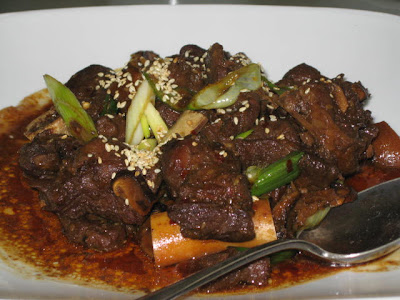