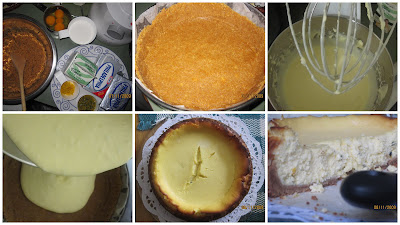 I started trying out cheesecake recipes again when an office colleague brought a baked lemon-cheesecake for our office 2009 Melbourne Cup afternoon tea. It was a recipe from the May 1999 issue of Good Taste magazine. I've tried it immediately that weekend, served for the afternoon tea we prepared after Bianca's final confirmation mass. I've tried the different variations in the original recipe (which will be posted separately), and from other recipes as well. So this will be the first of a series of 3 cheesecake recipes.
Here is the first series. Baked lemon cheesecake. I captured the step-step instructions, just as it showed in the magazine. The cheesecake was a hit with family and friends. A cheesecake with a tangy sweet twist. The passion fruit* (my office colleague's variation) was a substitute for the lemon juice which was called for in the original recipe. The recipe featured is by Dimitra Stais.

1. Measure all the ingredients and have all the equipment ready before you start. Make sure the cream cheese, eggs and sour cream are at room temperature. This is especially important for the cream cheese and sour cream, so they will soften easily.
You will need a 20.5cm (base measurement) springform pan. I find it easier to remove the cheesecake if the base of the pan is turned upside down. Brush the pan with the melted butter to lightly grease and then line the base and sides with non-stick baking paper. This is more important if you have an springform pan.
2. To make the base, break the biscuits into pieces. Any plain sweet biscuits like Shredded Wheatmeal Biscuits, Morning Coffee Biscuits or Scotch Finger Biscuits are suitable. Place the biscuits in the bowl of a food processor and process until they are finely crushed. Alternatively, place biscuits in a strong, sealed plastic bag and crush well with a meat mallet of rolling pin. Combine the crumbs and cinnamon in a medium bowl. Add the butter and mix well until thoroughly combined. Make sure all the crumbs are coated in the butter.
Use the back of a metal spoon to press the biscuit mixture over the inside of the prepared pan, starting with the side. Use the edge of the spoon to form a corner edge in the base of the pan to ensure the biscuit base is not too thick. Place in the fridge for 20 minutes or until the base if firm. This helps the base retain its shape when the filling is added.
3. Meanwhile, preheat oven to 160°C. To make the filling, use electric beaters set on medium-low to beat the cream cheese in a medium bowl, scraping down the sides of the bowl twice, for 3 minutes or until smooth. Scraping down the sides of the bowl ensures the cream cheese is evenly beaten. Do not increase the speed of the mixer, as the cream cheese only needs to be softened and a higher speed will aerate it unnecessarily.
Add the sugar and lemon rind and continue beating on medium-low for a further 3 minutes or until the mixture is soft and creamy. This process will further soften the cream cheese, resulting in a smooth and creamy cheesecake
Add the eggs one at a time, beating well between each addition on low speed. Add the lemon juice and beat until it is fully incorporated. Place the sour cream in a medium mixing bowl and add 250mls (1 cup) of the cream cheese mixture. Beat with the electric beaters until smooth. This will help soften the sour cream and prevent overbeating to remove lumps. Add the sour cream mixture to the remaining cream cheese mixture and beat until combined. Scrape down the sides of the bowl occasionally during beating to ensure all the ingredients are thoroughly combined. Avoid overbeating the mixture and incorporating too much air, otherwise the cheesecake will rise, crack and become too brown, then collapse and shrink in cooling.
4. Place the lined springform pan on a shallow baking tray to catch any butter that may ooze out of the base of the pan. Pour the filling into the prepared base.
5. Place in the centre of the preheated oven and bake for 1 hour and 10 minutes or until the centre trembles slightly when the side of the pan is gently tapped. The cheesecake should have risen slightly and turned a pale golden colour. If you think it trembles too much and needs further cooking, bake for another 5-10 minutes, checking every 5 minutes.
If the cheesecake doesn't tremble when tapped, it is overcooked and may crack on cooling. It will slightly drier in the centre and less creamy, but still acceptable to eat.
6. Turn the oven off and place a wooden spoon inside the oven door to hold it slightly ajar so the cheesecake cools slowly. This will prevent the cheesecake from shrinking too quickly. Allow the cheesecake to cool in the oven for 1 hour. Remove from the oven and transfer to a wire rack to cool for a further 1 hour or until cooled completely. Cover with plastic wrap and place in the fridge for at least 3-4 hours or preferably overnight to chill thoroughly.
To serve the cheesecake, place the cold unmoulded cheesecake on a board, unclip the side of the pan and carefully lift off the side. Use a thin=bladed knife to cut the cheesecake into wedges. To prevent the cheesecake sticking to the knife, dip the knife into hot water and wipe dry between each cut. To serve the cheesecake whole, use an egg slide or long spatula and slide it between the biscuit base and the baking paper lining the base of the pan, carefully dislodging the cheesecake. Gently slide onto a flat serving plate.
Variations:

Raspberry Lemon Cheesecake: Use a metal spoon or spatula to fold 150g fresh raspberries into the cream cheese mixture after adding the sour cream in step 3. Sprinkle 150g fresh raspberries on the surface of the uncooked cheesecake in step 4. To use frozen raspberries, defrost 4300g in a single layer on a double thickness of paper towel for 3 hours in the fridge. Use instead of the fresh raspberries as directed above. Continue as for the basic recipe.
Chocolate Fleck Cheesecake: Omit cinnamon and lemon rind. Use plain 250g plain chocolate biscuits instead of the Nice biscuits and increase the melted butter to 150g. Increase the caster sugar to 165g (3/4 cup). Melt 100g dark chocolate and spread over the chilled biscuit base at the end of step 2. Coarsely grate 100g dark chocolate and fold into the cream cheese mixture after adding the sour cream in step 3. Reduce baking time to 1 hour. Continue as for the basic recipe.
Apricot Swirl Cheesecake: Substitute the lemon rind and juice with the same quantities of orange rind and juice. Chop 100g dried apricots and place in a small saucepan with 250mls (1 cup) water. Cover and bring to the boil. Cook, covered, over low heat for 5 minutes. Process the apricot mixture until smooth. Transfer to a bowl to cool. At the end of step 3, transfer 1/3 of the cream cheese mixture into a medium bowl and mix in the apricot mixture. Pour about 1/4 of this mixture into the biscuit base followed by the 1/4 plain cream cheese mixture. Repeat with the remaining apricot and plain cream cheese mixtures. Swirl with a knife. Continue as for the basic recipe.

Although you haven't tried cheesecakes yet, I'm sure you will all acquire the taste as you grow older. Cheesecakes after all, don't have that rich fudgy flavour of a chocolate cake that kids love. But they have that creamy-sweet-tangy combination that goes well with white wine, coffee or your favourite tea.
By the way, blueberry cheesecake is daddy's favourite. How to make your own blueberry topping will be posted in a separate entry.