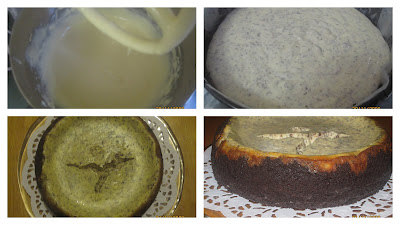 This is the second cheesecake recipe from the Cheesecakes Galore Series, which hopefully will extend to more than the three I'm planning to post here. I have somehow stopped after the 3rd, as I found the 3rd recipe the simplest and yet the most creamy and filling.

You will need to adjust/substitute some of the ingredients with the following:

And add the following steps to the original recipe:

This cheesecake made its way as a "dessert plate to share" to the December luncheon after the Filipino Mass we usually attend every first Sunday at the Our Lady of Dolours church. (This is a regular monthly lunch event after the mass composed of the Filipino community who frequent the church. But we only grace the luncheon every December. Actually with the hidden agenda of getting to eat some lechon!!)

About the cake?! Well, it was gone before I even got a chance to taste it. Literally in a flash! Not anyone from our party/group had a taste. But it doesn't matter. If its all gone, that must mean its good! Must try the chocolate fleck with a different cheesecake recipe.