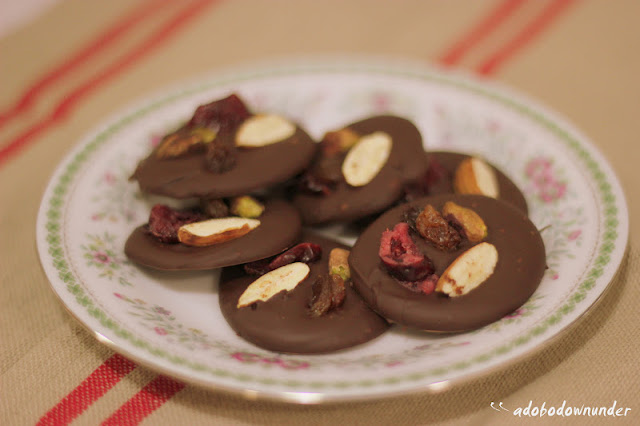 Late last week our oven went off.  Just like that.  Snap. Without even any hint of slowing down.  And since we're at a rental, we have to wait for things to be processed - report the incident to the real estate agent, agent to tell owner, agent to get trade, trade to schedule appointment to check and repair.  It takes some time to process, and since it was Thursday it had to be dragged into the weekend.

The first thing that went into my head when I noticed the digital clock on the oven was off was - "Oh no, the blog hop!"  I wanted to make use of the season's oranges and make an orange and hazelnut cake. But, all's well that ends well.  As I have mentioned in my previous posts about my tiny (yes its really just a small distraction, honestly!) addiction with Instagram, inspiration came right from that social media app through Bron Marshall - a NZ based chef and food stylist-photographer-writer. Go check out her site (and follow her on Instagram)!  She's cool and one of the featured chefs in ABC's Foodi Ipad app.

And so to cut a long story short. No oven, equals other forms of entertainment for this "nut".  Of course I did ask Bron how to make it and she just spilled out the simplicity of it all - they are discs of chocolates traditionally studded with fig, raisin, almond and hazelnut to represent the four mendicant order of friars (as part of the Prov in the church during the middle ages.  And after more googling, I found French Moments Sydney where it explains further the significance of these Christmas delicacies as part of the Provencal tradition. The colours of the ingredients traditionally represent the original robes of the Franciscans (the Grey friars) - grey : sultanas, the Carmelites (the Brown friars) - brown : hazelnut/walnut, the Dominicans (the White friars) - white : almond cut in half and the Augustinians (the Austin friars) - deep purple: figs/cranberries.  The colours of the fruits and nuts on the chocolate were symbols of the four mendicant orders of the church.

So while the choice of recipe for this blog hop was somewhat serendipitous, it was so worthwhile knowing about the short history of how this chocolate delicacy came about.

To make I used:

Prepare non stick baking paper on baking pan.  You can also trace about 4-5cm rounds on the paper.  Make sure to use the opposite side of the paper to spread the chocolate.

If using natural almonds, lightly toast them using a dry pan just enough to give them some colour and texture.  Cut them in half while still warm. (If using already roasted almonds, simply cut them in half straight away).

Prepare a small pot with water and let simmer.  In a bowl, pour chocolate and place on top of simmering water and melt, stirring occasionally with a rubber spatula.

Using a teaspoon, scoop some chocolate and spread into prepared rounds on the baking paper.

For each round, add a pistachio, half an almond, a raisin and a piece of cranberry.

Place the baking pan with the warm mendiants in the refrigerator to chill and set - 15-20 minutes (depending on how big the rounds are and how thick the chocolate is). 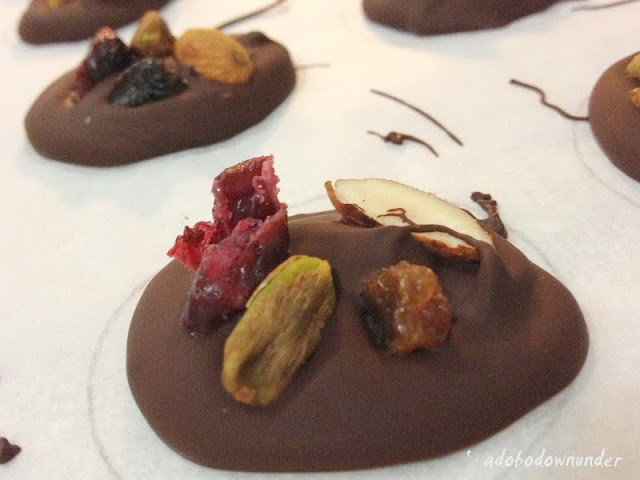 Pardon my French, but these mendiants au chocolat were a real treat!  And so easy to make.  Took less than an hour including chilling time.  Great for an after-dinner dessert or packed in little bags or boxes as gifts.  Hmmm, I think I know what to give as home made pressies for Christmas.