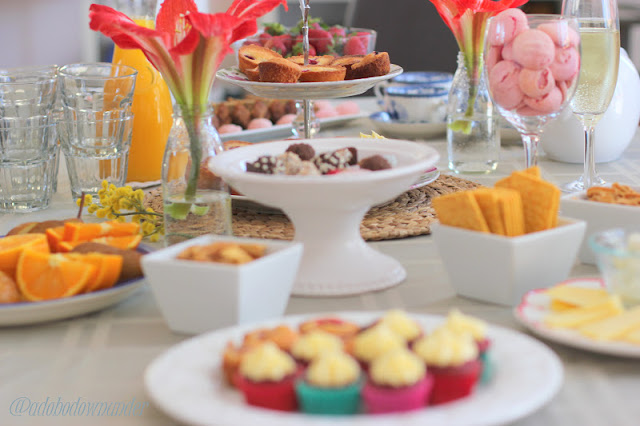 I am currently on a macaron challenge.  A self imposed one at that.  At home, I love cooking and baking!  Its a fairly new world for me because I've only started baking from scratch a few years ago.  Discount the peanut butter cookies we used to bake when we were kids.  My desire to bake was seriously triggered by all the morning tea and bake sales at the girls' school, and only started here in Australia.  Its a challenge for a mother to come up with baked goods for fetes, morning tea, afternoon tea and other school functions. 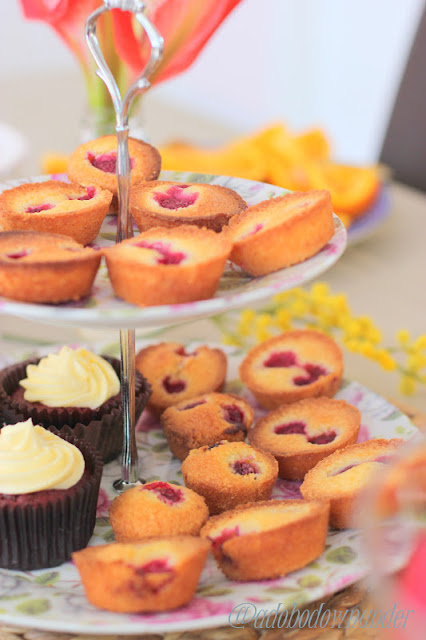 When we did our Pastry, Hot and Cold Desserts module early this year at TAFE,  it was pure bliss.  Making puff pastry from scratch, pate sucre, bread and all this marvellous sweet treats.  I was a kid in a Willy Wonka shop.  And I'm still learning. 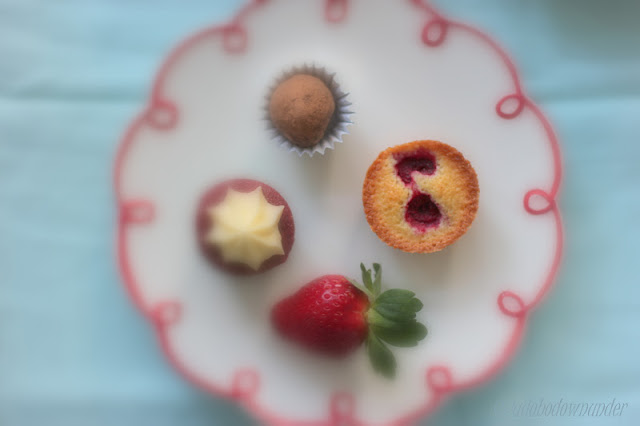 My baking interests though is focused more on simple classics.  I love and admire seeing fondant covered cupcakes and cakes with truly works of art (2-3 tiered with 3D figures, Oh my!)  but I don't want to go in the direction.  My fiddly fingers will only bear disastrous alien-like forms and my patience will then get the better of me.  I'm fine with piping cupcakes and icing cakes with a spatula.  Now going back to this diva called the "macaron", I've attempted twice in the last 3 days.  The first one called for a slightly different approach (no whipping the egg whites to stiff peaks), and resulted in flat, feet-less macarons that looked like cookies instead.  They tasted great! But nonetheless, they have been renamed in my repertoire as green tea almond cookies with sesame seeds. The second attempt was following the traditional French method and resulted with itty bitty tiny feet but lots of cracks on top.  Oh well. Back to the mixing bowl I say. 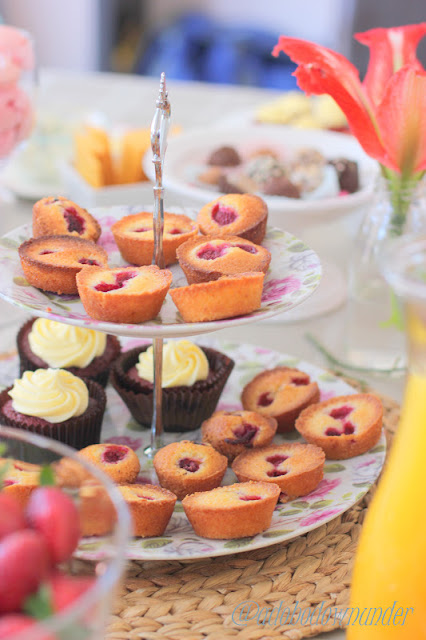 But meantime, I've got a high tea to showcase and lots of almond meal and egg whites, so the classic friands became the order of the day.  These gorgeous treats are making their way to this month's Sweet Adventures Blog Hop with the theme - High Tea, hosted by Jennifer of Le Delicieux!  Check out her mouth-watering Triple Chocolate Honeycomb Cake!

I love friands.  They are simple and really tasty.  The smell of them baking in the oven with hints of orange is just divine!  Enough to warrant some friends and family over!   This recipe is adapted from Margaret Fulton's recipe book Baking - The Ulimate Sweet and Savoury Baking Collection. 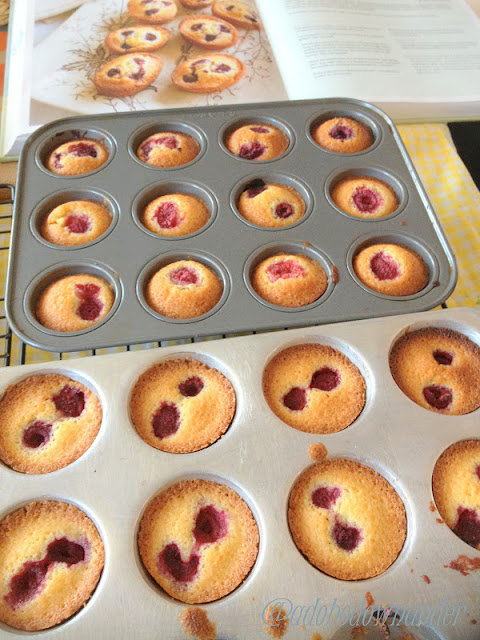 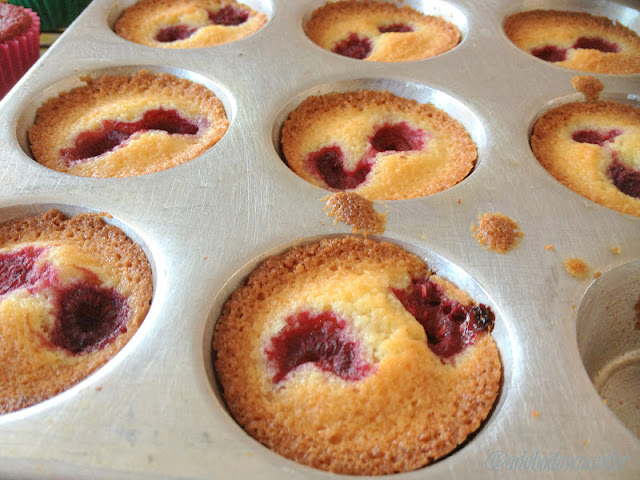 Place the butter in a saucepan on low heat until golden.  Set aside.

In a medium-large sized bowl, mix the almond meal with the orange rind,  icing sugar and flour with a wire whisk.

Add the egg whites and whisk, adding the melted butter slowly (you made need an extra pair of hands to hold the bowl while you do this), whisk until the batter is mixed well.  No hard or brown solids.

Half fill the moulds or cupcake tins using an ice cream scooper or a spoon.

Top each with 2-3 raspberries, then place the pan/tin on a baking tray and bake for 5 minutes.

Reduce the oven temperature to 200*C and bake for another 12-15 minutes.

Turn the oven off and leave the trays in the oven for another 5 minutes.  Remove from oven and turn onto a cooling rack. 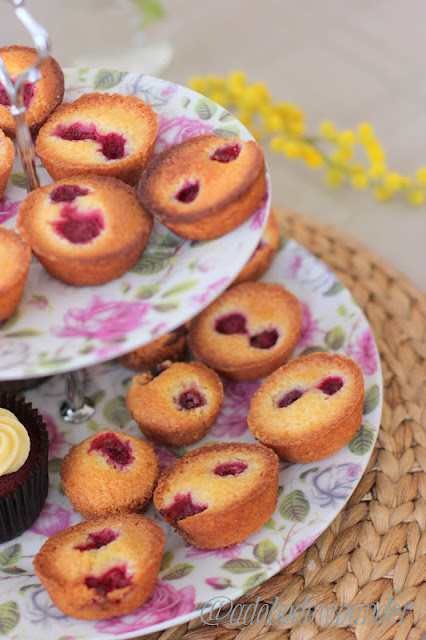 And because I've been on baking spree since Wednesday, it was only timing that a spontaneous afternoon tea with family and friends happened over the weekend. Hubby had overseas guests so we also did the Australian backyard barbeque Filipino style (grilled chicken inasal which shall be for another post).   These friands were the favourite among the spread, that I'm thinking a real friand tin would be in order soon. 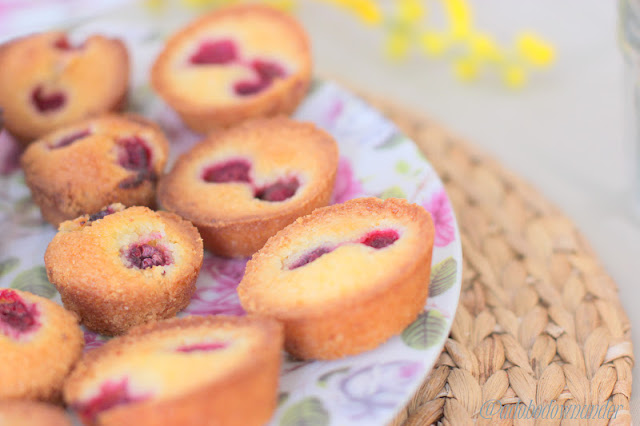