This unique noodle dish that is originally from Singapore and Malaysia became one of our favourite dishes in our quest for fast-food. Ultimately, when we get lazy and want to have take-away dinner instead of home-cooked meals, the first option would be Chinese. Its fast, furious and most chinese food tastes really close to home cooked meals, despite the assortment of soy sauce and salt and spices. It may not be the best option for some, but for us, it is a better option than doing the Dominoes or KFC or Pizza Hut. Not that we are health food junkies - absolutely not! We have our usual portions of "chicharon" (or pork rind) in most days, but that's beside the point.

Char Kway Teow has a lot varieties, in terms of the addition or subtraction of ingredients, but the most basic is the flat white noodles resembling coconut meat, bean sprouts, and onion chives. There are several good ones we've tried at (but not limited to) Chatz Noodles in Chatswood Westfield, Bar Asia in Lane Cove - this one comes with a hefty serving for such a good price. And Now, as in all good food tasted somewhere, I yearn to prepare it home-made given the time and the right ingredients. I've discovered tons of different varieties, some adding a bit of something, while others omitting a few ingredients, like here, here and here.

Recently, I unknowingly discovered the kway teow noodles from a new Asian store in Lemongrove in Chatswood. This was purchased immediately of course, and followed with the quest to find the rest of the unique Char Kway Teo ingredients - Lap Cheong (Chinese Sweet Pork Sausage) and the Chinese Pork Barbeque (mostly sold by Asian butchers).

Using an ordinary teflon lined huge pan, I went on to do the Char Kway Teow challenge following the recipes taken online. Despite the lack of the sambal spice and the Chinese pork barbeque, my version turned out alright and enough to warrant some oohhs and aahhhs from my own homegrown fans. 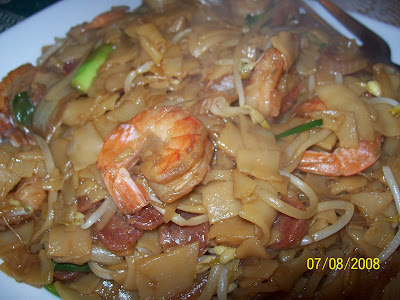 But perfection is the key as I was told the secret to the best Char Kway Teow is the smoky flavour which comes from a very hot wok and the blend of the soy sauce with the rest of ingredients. Maybe the next version will be even better. Definitely!
Posted by annabanana at 12:38:00 pm