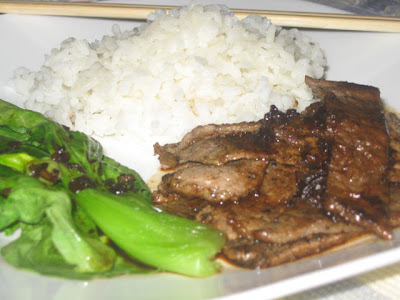 This sounds really professional, doesn't it?

This is the first among the many recipes I will be trying in the coming weeks until end September, being one of the (probably thousands) of testers for Jaden's Steamy Kitchen Cookbook.

I used the Sizzle Steak pack from the local supermarket, seasoned with salt and pepper then pan fried, topped with Jaden's recipe here. I reckon this works best as marinate but decided to use it as sauce because I didn't have the right kind of steak (thicker cuts), and so I've saved some of the sauce for use later in the week with some beef scotch fillet on the grill (Yum!)

I can't wait to try the marinade and grilled version.
Posted by annabanana at 5:15:00 pm