“Tell me what you eat, and I'll tell you who you are.” -  Anthelme Brillat-Savarin

When was the last time you did something for the first time?  This was an excellent TV ad by Emirates. First time to see and feel snow, a grandmother’s first time to ride a helicopter, a scuba diver’s first encounter with sharks.  All exhilarating experiences for the involved people.  It’s a great ad.  It ended with the tag line, “Keep discovering.”  Great message.

And of course it goes without saying the obvious.  That it was a first time for mum to be introduced lamb brains.  We've seen this many times, especially at our favourite reality cooking show Masterchef.  I wouldn't have anticipated it sooner, but there it was facing mum right in the face.  In Kitchen 10.  Menu for the day!  Herb crusted lamb brains with lemon pepper mayonnaise. I know.  It sounds and looks icky.  Offals after all, in culinary terms are off cuts or entrails and internal organs of butchered animals.  But it shouldn’t be.   Coming from a country that has isaw or chicken and pork intestines barbequed and sold in skewers at street corners and sometimes deep fried called “chicharon” or crispy pork skin, and has found food use for pig's blood, lamb brains must be something easier to consume, in concept and in the palate.  But… eating brains sounds like something you’d be doing if you’re were in an Indiana Jones movie.  And as part of the intro,  I need to add in a word of caution.  The following image may not be for the faint at heart.  But look at the photo above!  Definitely suits the saying, looks can be deceiving!

Break the brains into halves along the middle (you will have 2 pairs and halved into 4).  Wash the brains and cut out fat and sinew (white parts).  Place the brains in a small bowl and soak in milk to lighten their colour.  Leave for about 20 minutes.
Finely chop the herbs and mix with the bread crumbs.  While brains are soaking, prepare your crumb a l'anglaise which is simply your seasoned flour-egg wash-breadcrumbs in separate bowls.
Take the brains out from the milk and place on a tray with kitchen/paper towel to drain the milk and dry the brains out a bit.
To crumb a l'anglaise, dip one brain at a time first in flour, then egg wash then coat with the breadcrumbs.  Do this until all brains are coated.  Set aside.
Prepare a medium sized skillet in medium heat.  Add olive oil and shallow pan fry the brains until golden brown.   (The instructions for the recipe in the textbook says to deep fry, but Chef A insists, that deep frying is easy and can be done by anyone.  But pan frying shows a Chef's technique and skill.) 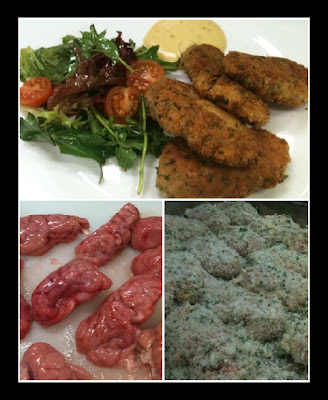 Lemon Pepper Mayonnaise
200ml mayonnaise (either use store-bought or make your own which mum posted here)
1/4 lemon, zest and juice
10g lemon pepper (again, store-bought or make your own)
Mix the mayonnaise with the ingredients. Chill then serve as accompaniment (to any dish).
Surprisingly, it didn't taste like anything different or disgusting.  It was soft with a texture almost like squid.  Smooth.  But can I say, the closest similar taste would be chicken?!  Yes!  Tastes like chicken!  Don't they all?   Come to think of it, I'd choose lamb brains over Cambodia's fried tarantulas and South Korea's dog meat and offal!
Posted by annabanana at 9:38:00 pm