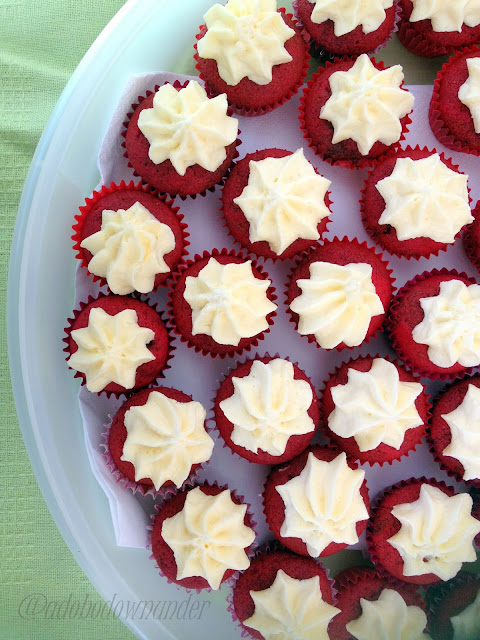 December is a busy and expensive month for us.  We have a birthday, an anniversary and then Christmas.  The gift giving can get really overwhelming if we don't stop ourselves from the purchases.  In past posts, I always mention that Christmas shopping for me, has gone from overly organised (back in my single days), to last minute shopper.  Before, I would have gifts for everyone months before December and all I need to do in the last few days leading up to Christmas will be to wrap them. These days, hubby (as he is constantly online), he purchases most of the girls' presents ahead.  He's good like that.  He's reliable that way and I am so grateful.  Really. A few days ago, I just started wrapping them.  And I'm really impressed. Now all that's left now is to get Santa's presents.

Now that part, he leaves to me.  I try to be really sneaky and at the same time realistic every year.  But just last year, lists to Santa has extended into the technology realm - you know, the latest iPod or some other overly expansive gadget.  The girls were really cheeky.  "If mum or dad won't buy us, they maybe Santa can get this for us?"    Well, for the younger girls at least.

I don't know about you, but I'm the more conventional mom when it comes to toys.  I mostly get board games instead of apps, crossword and word search puzzles and books instead of the latest Wii game.  Last year, just to get into the apps world, I got them the Draw Something board game.  Yeah.  I'm not saying I don't play game apps or have the latest from iTunes, but I still do believe in the basic of playing - interaction (face-face) and having a good time.

The younger girls at 10 years old are sort of in between that age when magic is becoming reality.  Their friends at school don't believe in Santa and of course, they get into that stage where what is said in the classroom or in the playground, just might have some truth vs what mum/dad said.   As much as possible, I'd still like to play that game while they're still young. I think believing in the idea of Santa creates a sense of wonder and awe each Christmas morning, and I love watching their reaction.  The open-mouth-surprise and smiles are priceless.  That's the part I love.  So don't judge me!

This year, Santa's elves at the North Pole still don't make Apple products so that's out of the list for now.  But some creative stencil stamps, new board games and a magic juggling ball might just under the tree next week. 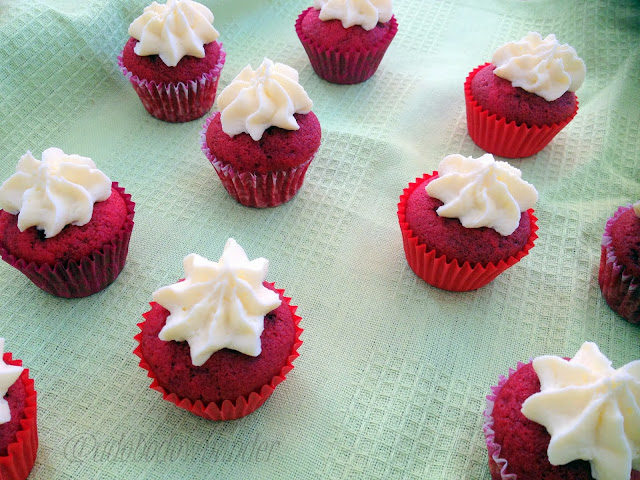 Now Christmas is my favourite time of the year.  In Australia, when it's the middle of the summer makes me love it even more.  Summer fruits, beautiful colours all round, days at the beach, endless blue skies, warm breeze, Christmas decorations, Carols, and just the deep sense and feeling of delight in sharing and giving.

Each year since two years ago, I started making homemade food gifts to friends, work colleagues, teachers and neighbours.  I love the idea of getting busy weeks ahead planning what it will be, shopping for ingredients and making them in layers (a day at at a time).  And these red velvet cupcakes are always a hit with anyone who receives them.  Why not?  They're red and so Christmassy!  Don't you think so? 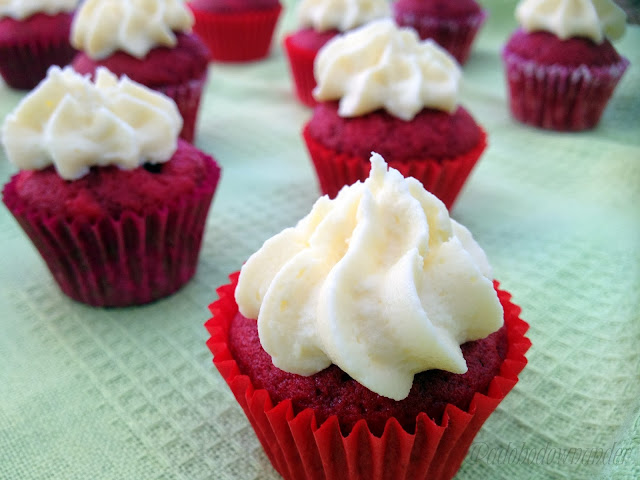 This recipe is adapted from the Joy of Baking.  I have made them so many times and have varied the brands of ingredients with the same result.  I have doubled Stephanie's recipe to make 24+ half-cup sized cupcakes.

In a large bowl, sift together flour, baking powder, salt and cocoa powder.  Set aside.

In a measuring jug, mix buttermilk and food colouring until incorporated. Set aside.

In the bowl of your stand mixer, cream together the butter and sugar until light and fluffy.

Add the eggs one at a time, beating after each addition.

While the mixer is on low, add about 1/3 of the flour mixture, then the buttermilk mixture into the bowl. Add the flour and buttermilk alternating in three batches and mix until the batter is consistent and there are not more flour lumps.  Scrape down the sides of the bowl when necessary. Put the mixer on stop/pause.

In a small cup, combine the bi-carbonate soda and vinegar.  Allow the mixture to bubble.

Turn the mixer back on to low and quickly add the bi-carb soda-vinegar mixture and continue to mix for 10 seconds.

Scoop a tablespoon in each cupcake hole or at least a third full.

Bake in the preheated oven for 20-25 minutes, or until a skewere inserted into the cupcake comes out clean.

Place on cooling racks and leave to cool. 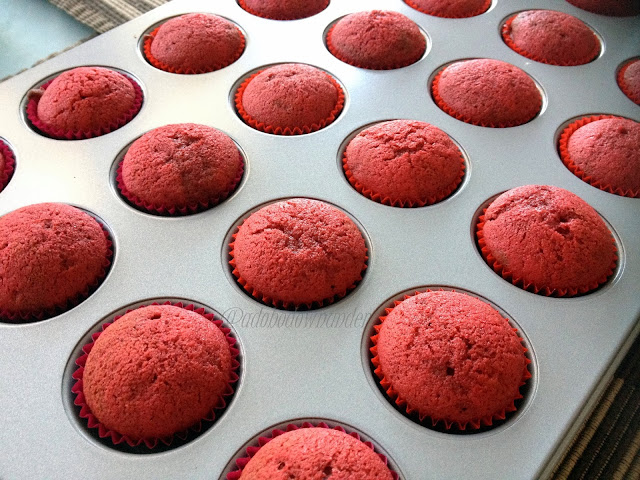 In the bowl of a stand mixer, beat the cream cheese and butter until light, fluffy and soft.

Add the icing sugar a tablespoon at a time and continue mixing.

Add the vanilla extra and mix until incorporate.

Using a spatula, spoon and spread on top of cupcakes or spoon into a piping bag with a star tip and pipe onto cupcakes. 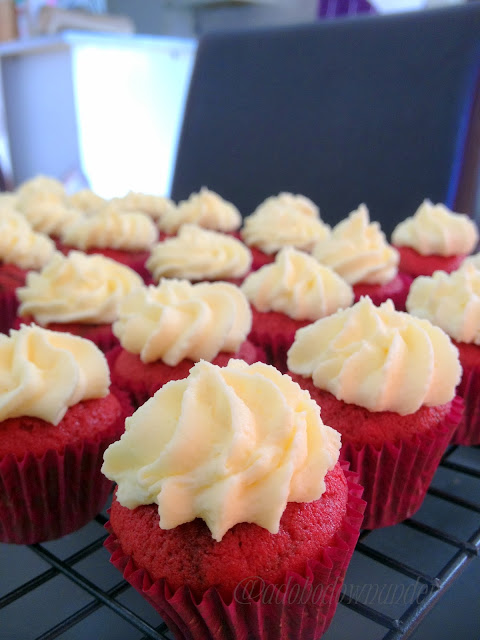 
* To soften butter, take it out of the fridge to thaw for at least an hour or more (depending on the weather and season);


* When preparing your butter and cream cheese, it helps in the mixing/creaming when you cut them into cubes.


* As soon as you add the vinegar-baking soda, I always count 10 seconds to the dot then turn off the mixer and just fold the batter gently with a spatula.


* Don't overfill your cupcake tins.  If necessary, which is the case with me, I usually prepare another cupcake tin with liners for the excess.


* When creaming the frosting, make sure all ingredients are at room temperature. When one ingredient is even slightly cooler, it can cost the frosting to look curdled - meaning the butter becomes solid again.

* For buttermilk substitute, you can make your own sour milk which is 1 cup milk with 1 tablespoon lemon or white vinegar.  Let the mixture sit for 5 minutes until the milk has curdled or thickened.  I

* Plain natural yogurt can also be a substitute for buttermilk.  With the same amount in the ingredients, prepare  your yoghurt by mixing it with a teaspoon to take out the lumps. (Joy the Baker has some variations on the buttermilk substitution you might want to try.) 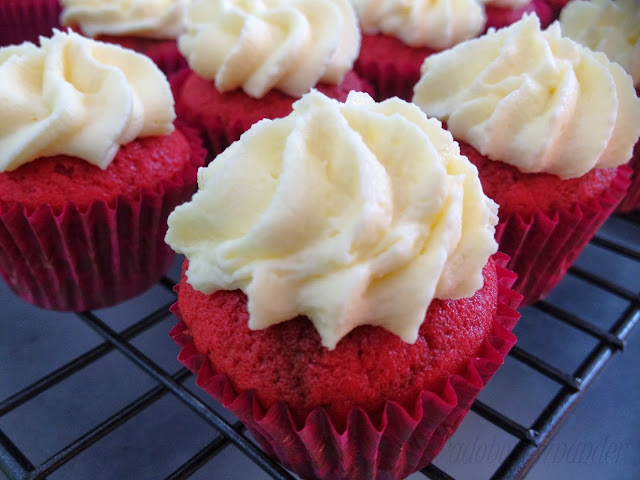 And so it's only 8 days till Christmas!  Are you ready yet?

Have you planned your Christmas menu? 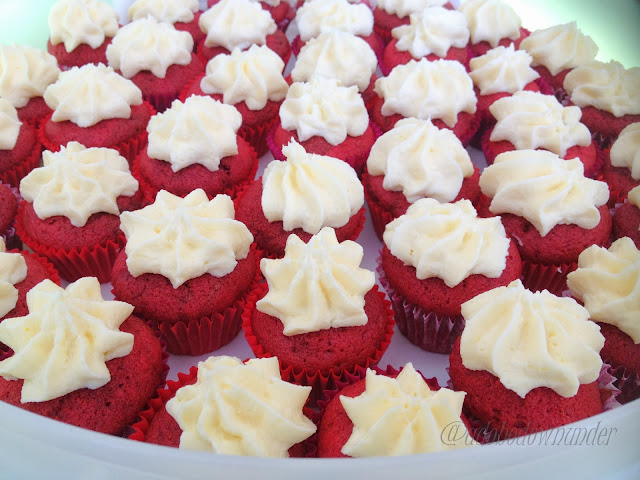