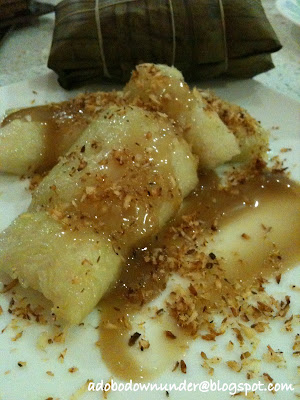 For two weeks, mum and some friends have been planning on a cooking session for Suman sa Lihiya, which was delayed because of the sheer lack of banana leaves around.  Over the weekend, it rained!  Of banana leaves! And the cooking class began.  Despite the disorganised start, it all ended with plenty of laughs, stories, recipes and suman to share around!  Mum is ever so grateful for Tita D for opening her kitchen to us, two Tita C’s for all other ingredients and plenty of banana leaves and wrapping prowess, to the three of you – J A S, for showing exemplary skills in tying the suman with bows like presents, and of course, the taste testers and critics.  Without everyone’s generosity, this suman would not have made its way here.

Suman is an indigenous Filipino delicacy which is cooked rice wrapped in banana leaves.  The variety of the suman you can count with your fingers, but this specific variety – Suman sa Lihiya, Mum can only guess, originates from Batangas.  Why?  These were the kinds of suman that Tatay (your great grandfather)  would bring home every time he makes his regular trips to Lipa Batangas. All the grandchildren would be having this for afternoon tea and we aptly called this - sumang magkayakap, which translated would mean  "hugging suman" because they look like two things hugging each other.  Batangas is one of the towns in Southern Luzon in the Philipines, and this sweet delicacy is commonly sold in the local markets within the Batangas township, accompanied by the sauce and the latik.  All this time, mum thought that making suman was difficult and left to those who have the muscles and stamina to stir through hours and hours to make the sticky rice then wrapped meticulously with the banana leaves. And when mum found this from A Cupcake or Two, it just had to happen.   And so this suman worshop started, and Tita D has generously offered her kitchen for the next cooking sessions!  Next masterclass – Sansrival!! 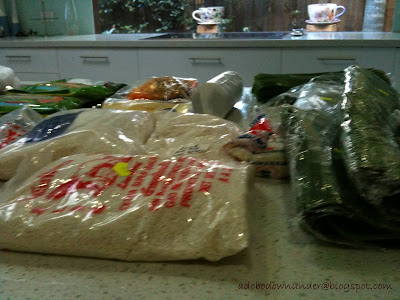 (Katherine’s recipe called for lye water.  Mum found through Google that lye water can be substituted bicarbonate of soda.  We substituted the lye water for this because we couldn’t find it anywhere.  In future suman adventures, we might just omit the lye water altogether.  Lye water is used as a preservative for the food, and since usually, this kind of dish will not last, there’s no point of adding a preserving solution.  Right?)


Banana leaves – cut into approximately 30 x 25cm squares
(doesn’t have to be perfect, as long as it can fit a scoop of rice) 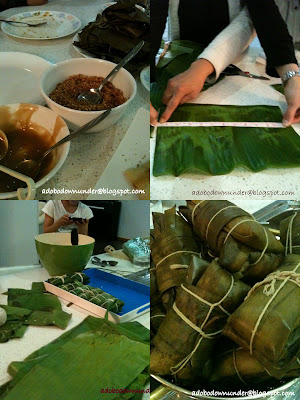 Prepare banana leaves.  Wash in running water, pat dry with a kitchen towel then run through stove top (turned on to medium heat).  This will make the banana leaves soft enough to be folded, but make sure not to heat them to much because then they will be crisp and not usable for the suman.
Wash the rice in running water to get rid of grit, then drain into a large bowl.  Add the bicarbonate of soda solution and mix.
Scoop about a quarter cup of the glutinous rice onto the banana leaves.  Fold both the long side then roll or fold back to wrap the rice.  Then fold one side of the parcel.  Tap the rice then fold the other side. 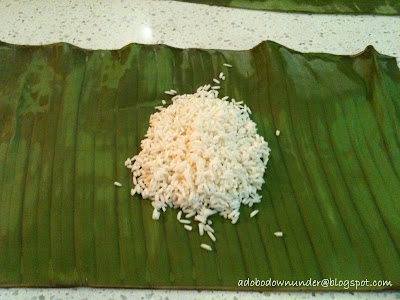 (English Patis has an excellent step by step instructions on how to do this, including photos).
But to take you through this – imagine you’re wrapping a long cylinder shaped object.  You first hold both ends of the long side and fold them up, holding them together, you tuck them around the object in a snugly wrapping action.  Then you take the right end side, fold and tuck under.  Then the left end side, fold and tuck under. 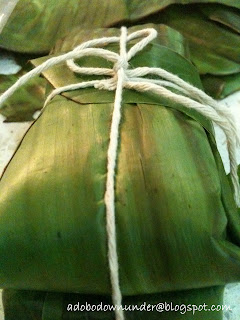 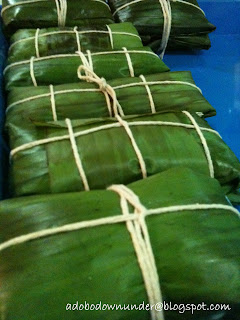 Tie the wrapped rice with kitchen twine (we decided it doesn’t matter how, just as long as its snug as a bug, tied together and no bits of rice peeking through.  But maybe in future suman workshops, there will be a more standardized process of tying the suman to make it “just like it is in Batangas) 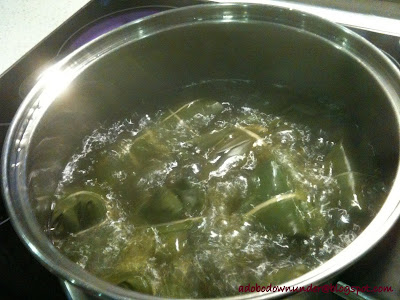 The wrapped rice are then placed in a large pot with boiling water and cooked for 2 hours.  (Making sure to check every now and then and refill the water so that we don’t have uncooked suman in the end)

While this is cooking, prepare your sauce and latik.
Coconut jam/sauce
2 cans of coconut cream (standard size about 375-400ml)
1 and ½ cups brown sugar 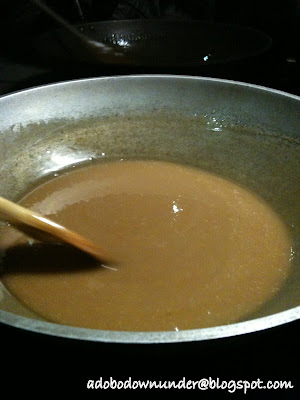 Place in a sauce pan and mix together until golden brown.  The sauce needs to be stirred occasionally to avoid sticking on the pan.  This will reduce to about 80-90% and have a thick consistency. 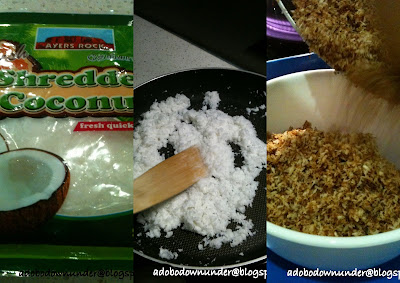 Place in a shallow pan and mix and stir until golden.  This will come out crisp and smelling nutty.


Serve the suman on a plate, drizzled with coconut sugar sauce and topped with latik. 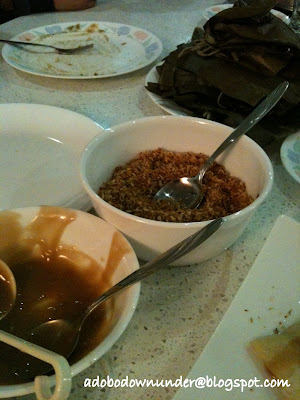 This is the ultimate comfort food for mum.  Took me back to those years spent in Inay’s dirty kitchen – eating “suman magkayakap” brought by Tatay. Despite some of the suman had uncooked portions, everyone raved about it and had more than seconds!  A very productive weekend afternoon, spent with family and friends and suman to share.  Hugging suman that is!  Who doesn't want hugs?!
Posted by annabanana at 10:28:00 pm