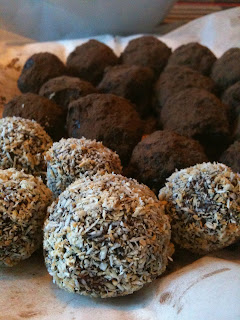 It’s amazingly odd to see 3 shrieking 8yo because a well known chef is a guest judge at a cooking show on TV.  In yesterday’s masterchef episode, all three of you (J, A, S) in unison were shrieking with excitement, the way Ate would be screaming while watching JB’s Never Say Never on DVD.   Heston Blumenthal was on Masterchef! You've known Heston from his cooking show aired since last year called Heston's Feasts.  Everyone was fascinated by his creations and the science of his cooking.
Ate also had this same excitement before, about 6 years ago, when all that she could ever watch on TV with mum was the Lifestyle Channel and her favourite personality was Wolfgang Puck.  So while it was interesting to watch you girls squeal, I wasn’t wondering at all where this was all coming from.  Mum only realised how much influence I have had on you all for the past 8 years.  While Ate’s interest in cooking shows and baking has dwindled as she grew each year, I’m sure the three of you will also develop your own different interests as you mature and develop your own distinct personalities.  This is already starting with J choosing the cello and was the first one who chose tennis lessons for a sport activity.  Whatever path you choose, mum and dad will always be here to support you.  Right now, I’m thrilled that you share my love for cooking and the kitchen, and hope that someday soon, we will all meet Heston Blumenthal or be lucky enough to partake of his gastronomic creations at the Fat Duck.  I think maybe just to see him in person is already a treat in itself. 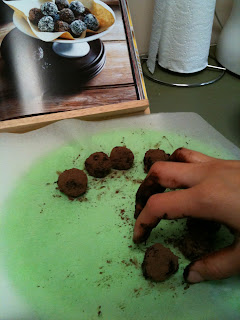 Mum has been amiss with the posting as this weather is just too miserable - too wet and too cold, which is the real winter in Sydney.  I don't mind the cold, but rain is just one of those things mum loves to hate - the smell of wet damp clothes, wet shoes in the house despite having a sturdy mat outside the front door, bits of wet leaves that are left like footprints on the carpet!  Aarrgg!  Really.  I'm  hoping this weekend will be much better.  Pretty please!
This is a late post - the chocolate truffles which Ate made on Mother's Day which were so goood, that she almost ate half of it.  The looked good.  Tastes fantastic!  And I never thought they were so easy to make!

This super simple chocolate truffles recipe is adapted from the Junior Masterchef Australia Cookbook Volume 1 .
60ml (1/4 cup) pouring cream
90g (2/3 cup) chopped, pitted dates
100g (2/3 cup) raisins (or sultanas)
200g good-quality chocolate (at least 50g cocoa solids), chopped
20g (1/4 cup) dessicated coconut
30g Flake chocolate bar
(we did not use this but used Hershey's Dark Cocoa as substitute)
1. Place the cream, dates and raisins in a small saucepan over medium heat and bring to just boiling point.  Remove from the heat, add the chopped chocolate and stand for 5 minutes to allow the dried fruit to soften and the chocolate to melt.  Using a wooden spoon, stir until the chocolate has melted and the mixture is combined.  Transfer to a bowl, cover and refrigerate for 30 minutes.
(When chilling the chocolate mixture, its important to check the consistency of the truffle.  It may take more than 30 minutes in some instances.  The chocolate should be thick enough to handle, but still a bit soft)

2. Line a tray with baking paper.  Place coconut in a small bowl.  With the Flake chocolate bar still in the wrapper and the ends firmly twisted, using a rolling pin, gently crush the chocolate bar inside.  Untwist one end and pout the chocolate into a separate bowl.
(Since we did not use a chocolate bar here, we used the time while waiting for the chocolate to "chill" to roast the dessicated coconut in the oven - place them on a baking sheet and roast for about 10-15 minutes until golden brown, making sure not to burn them.)


3. Scoop 3cm potions of the truffle mixture out of the bowl and drop onto the lined tray.  Using your hands, roll into balls in coconut and other half in crushed chocolate (or in cocoa).  Return the truffles to the lined tray and chill for a further 30 minutes to firm before serving.
Mix and match: Flack chocolate bar can be substituted with grated chocolate or drinking chocolate.
More please: The truffles can be stored in an airtight container in the fridge for up to 1 month.  Remove from the fridge 1 hour before serving. 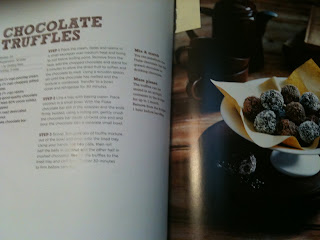 Chocolate truffles packaged nicely in pretty boxes are great Christmas or special occasion gifts!  Now we might have to plan and come up with great packaging ideas for December, as it is our summer time.  I am really tired of this wet weather!