I love birthdays. Its that time of the year when we can actually indulge in our favourite food. Including cake, cake and more cake.

This time around, as my girls approached their 5th birthday, we decided to do something brave. Host a birthday party for the little people. And so, those weeks with my nose on tons of recipe books was worth it. Its time to try baking cake from scratch. Now, that is a big feat for me, not to mention the fact that the thought of being a party host for little ones already makes my brain throb. But I love my girls and this is going to be their first party in Sydney. Previous birthdays were done at home with family and last year was in preschool so those don't really count for a "real" party. Now no matter how simple the party is, organizing one is not really that simple. There is the matter of the loot bags, menu (with consideration for allergens), decoration, invites, and of course - activities. What will they do in those 2 hours?!!!!

The girls love Hi-5 (an original Australian group catering to toddlers and preschoolers) and so it was only apt that they have Hi-5 as their birthday party theme (Its amazing how many merchandise one can get online!). Now, while I do love to cook and be in the kitchen, parties make me crumble too. I may prepare something gourmet for a week night dinner, but I can never muster my hands to prepare something on a large scale. And so the menu had to be something frozen - something good that can be baked fast and served straight away. Nibbles that can be bought and eaten without much of the fuss, as I still need all the energy to concoct the birthday cakes from scratch! And so we had - sausage rolls, meat pies, corn on the cob, sliced watermelon, chocolate cupcakes (which I also did from scratch - oh my!), and mini ice creams served in a bowl (I got the idea from Simply Bill too - chill the bowl in the freezer beforehand, then serve the mini ice cream sticks upward). 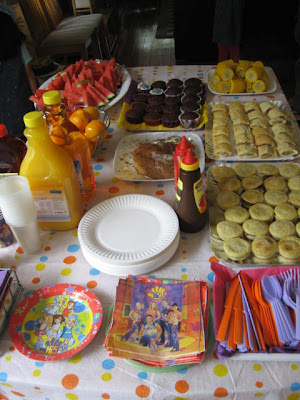 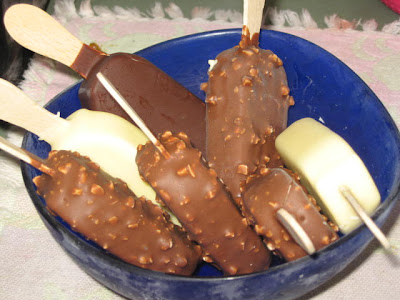 And so, the birthday party (hosted on the Anzac Day holiday) was my excuse to try on the best chocolate cake there is - in all of the recipe books I have on hand, borrowed from the local library. 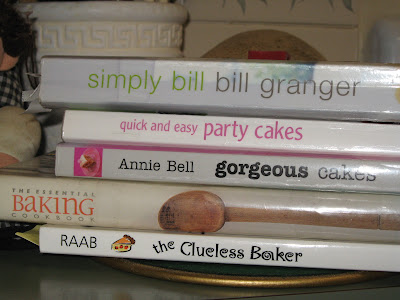 For the birthday party cake (I had to make three!), I decided to try two chocolate cake recipes. Both chosen for the simplicity of ingredients and ease of preparation. For my first attempt, I used Bill Granger's easy mix chocolate cake with real chocolate frosting from Simply Bill. The recipe was simple enough and also had an interesting take on the frosting - it called for combining sour cream and dark chocolate. The cake turned out alright, but I found it too fussy to do another one as this recipe is for a 2-layer cake. The result was an absolutely devlish looking cake but was lighter in colour. 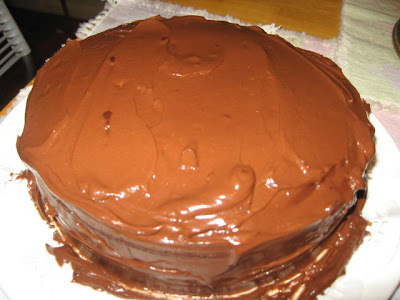 The next cake I took on was from The Essential Baking Cookbook for the simple Chocolate Cake recipe. The ingredients were on hand, and the preparation time was just right to still be able to get out of the kitchen in time for the party. This recipe was unique as the cake batter called for blackberry jam, which all the more intrigued me and pushed me to try it. The result? Well, despite substituting the "blackberry jam" with what we had in the refrigerator (I used plum jam) by far, this is the best tasting chocolate cake I have ever done (counting the ones from ready-mix boxes). The cake is moist and the frosting was an equal match to the cake itself. I made 2 of this (one square and one round) and let the guests decide which one is best. The verdict came out - the kids love the moist cake while the adults did love the sour cream-dark chocolate frosted cake. This cake came out with the cake darker in colour than the previous one. 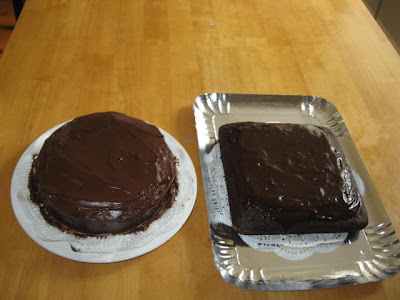 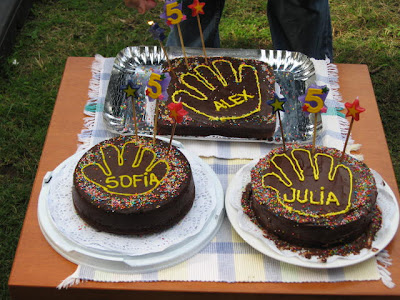 And while all these made me exhausted at the end of the party, it didn't stop me from making another batch (using the latter recipe) for the girls actual birthday. Another round for candle blowing is a wonderful thing. Especially when we know there's more chocolate cake to bite on! 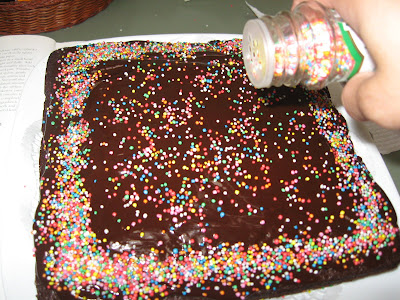 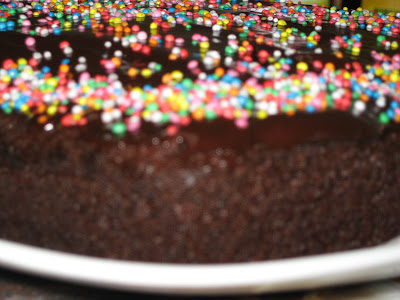 Not only did my oven worked over time last weekend, I can't say much of what's left of my assistants in the kitchen. Here they are, all tired and grubby from all the work. Till the next birthday celebration! 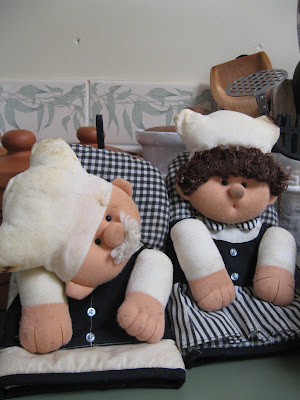