This dish is one of my favorites. Fast, simple and my daughter loves it. The smoky taste of the bacon plus the texture and roboust taste of the parmesan is enough to make this part of our monthly dinner menu. Previously, I would prepare carbonara using thickened cream instead of eggs, but found this recipe is more flavourful and not too creamy. I've gotten this recipe from allrecipes.com but have substituted some ingredients and eliminated some. In this instance, I've substituted the parsley with green peas and have not used white wine (which was optional). This is one of those 30min meals which should be a must in busy households such as ours.

The basic ingredients : 1 pack 500g spaghetti noodles; 1 small onion, chopped; 2tbsp olive oil, 8-10 strips bacon (more if you prefer), 1/2 cup frozen peas, 1 cup parmesan cheese, 4 eggs, beaten; salt and pepper to taste (again, if preferred. In this case, I don't normally use salt but a little pepper, because the bacon and the parmesan are already salty by itself). 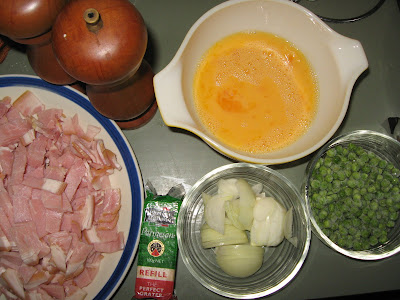 For starters, the bacon is diced (according to how big or how small you want it to be). I usually slice it lengthwise first, then dice it up cross-wise. I use half a pack of a 1kg middle bacon. 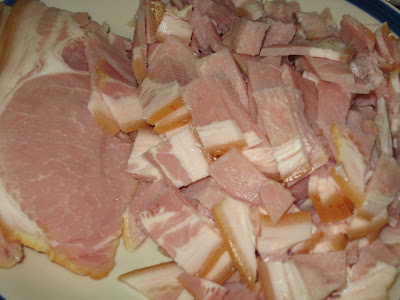 First cook the bacon in the olive oil until brown, but making sure not to burn it. Drain this in paper towels. In the same pan leave some of the bacon drippings then stir the onions until translucent. Then add back the bacon. Stir for about half a minute and then add in the drained spaghetti noodles. Put heat on to low, then add the beaten eggs and the parmesan cheese. Mix well and make sure the eggs are cooked through. Once thoroughly mixed, turn off heat then stir in the peas. This will still cook the peas but won't make them too soft and soggy.

You may serve extra parmesan cheese and bacon bits on the side.

Serve warm with garlic bread or bread sticks, and enjoy! 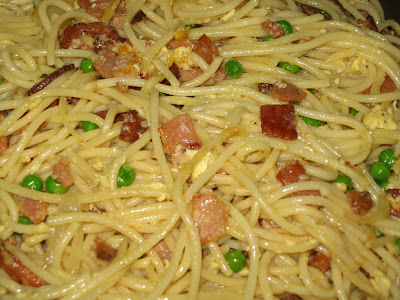