Several weeks ago, I came across this vegetable stir-fry noodles from a sushi kiosk at one of the local shops. It was an absolute delight! As with almost every kind of meal I take outside of the home, I investigated the ingredients and tried to catch the taste. The meal contained julienned carrots, bits of brocolli, Chinese mushrooms, sesame seeds and it was spicy hot, and the noodles was something unique - thicker than the usual rice vermicelli noodles and was glassy in texture. It was something I've never seen or eaten before. And so from then on, I have been on a quest. To hunt for that kind of "noodle" and prepare the same stir-fry noodle at home.

Several weeks passed and with numerous Asian stores visited, I still haven't found it. Or even, haven't got a clue of what is was - what's it called. And so with so much interest and excitement to try it at home, I did prepare it and substituted the "glassy" noodles with the flat rice vermicelli kind. It turned out alright, but something was not quite right. Somehow, the "thick-glassy" noodle was missing and my palate was somehow not content. My taste testers (hubby and friends) were convinced it was "gourmet" good. But still, my quest for finding the right kind of "noodle" has failed me. But life goes on....

And then, two weekends ago I found it! It was staring right at me at one Asian shop (Miracle Supermarket in Rhodes) we happened to pass by during one of our weekend shopping trip. There it was - glassy and thick. And then we were introduced. Meet the Potato Starch Noodle! 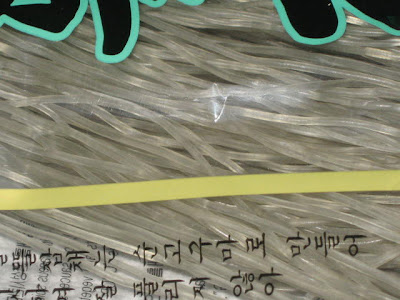 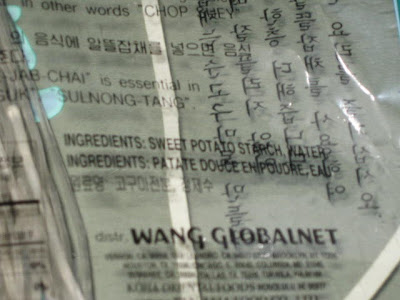 And now, the quest has ended and its time to prepare again, the vegan stir fry noodle, this time with the correct ingredients.

For starters, the noodles have to be soaked in boiling water and then left for 10 minutes. Then drain it in cold water (instructions in the packet). * Note on the boiling water - turn off heat once noodles are soaked. It will make for a firmer texture and not soggy. Here they look like raw dilis or some seaweed grass, but upclose they look like strands of plastic nylon string. 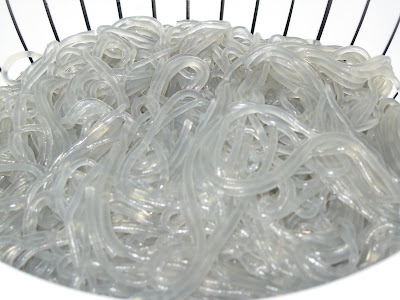 This time, because I have been buying prepared packs of veggies lately (Asian stir-fry, coleslaw, etc), I used what I had at home. The Asian stir fry packet (Woolworths) consisted of julienned carrots, purple cabbage, white cabbage, cauliflower, celery and some onions. I added some more chopped onions (white) and Chinese mushrooms. Using vegetable oil, the veggies were stir fried quickly (less than 3 minutes), added the Chinese mushrooms and mixed the noodles. I poured a bit of sesame oil, chilli oil and chilli flakes, mixed for another 1-2 minutes. Then transferred onto a serving dish and sprinkled with sesame seeds. The result is just as I expected - the same taste, texture and aroma that I have experienced several weeks back, but this time with a certain label of "special"... what with so much waiting that went into it. 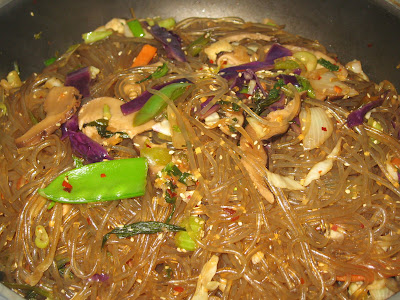