Inspired by a site I frequently visit, I was taken to try baking pandesal from scratch. Without much of the experience in dough kneading or even baking per se, I went onto it with much gusto like a child would handle colouring books. It was amazing, as I went on to check the dough has indeed risen. Somehow, that process alone told me its a success half-way, despite the absence of the correct instruments too - I used a hand-held electric mixer to mix the ingredients including 5 cups of flour! Now that is a big effort for my tiny and vintage GE electric mixer. Anyways, it was all too good to resist, as we love pandesal and miss it terribly. (We do have some pandesals sold down under from several Filipino communities/suburbs, but its a long way to travel just for several pieces).

So after 2 hours, the dough did rise and doubled in size, which made everyone excited. Using an electric oven, the pandesal was cut and laid down onto the cookie sheets. The cuts were in mismatched proportions - not oval, not round or squarish. Just cut in the most cave-man way you can. After 15-20 minutes, the house was smelling really scrumptuous with the smell of freshly baked pandesal pouring over the four corners of our home. Despite it being dinner time, and we were having pasta bolognese, the pandesal was served. Everyone excitedly took their rations. But never had second serves. Which the least to say, the pandesal was not as "hot" as expected. 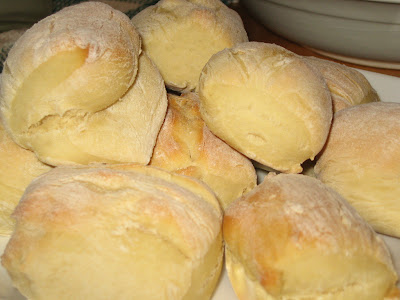 The skin did look very appealing and the smell was delightfully filling. However, the insides were the not so good part. The bread was a bit too thick and heavy and did not resemble anything such as a bread. It actually tasted and felt (in the tongue) more like a biscuit (the English kind of biscuit). Its either I used too much yeast, or less flour or my mixing wasn't as thorough as it should have been. Oh well. There's always a first time, and the next time I go shopping, I'm on the look out for a real honest-to-goodness kitchen top electric mixer, complete with the dough hooks and stainless steel bowl. Maybe at least, the instruments can add to the end result's "hotness" factor.
Posted by annabanana at 1:14:00 pm