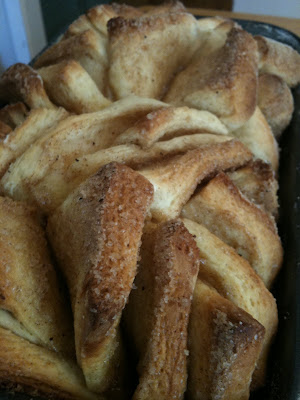 Saturday was supposed to be an early start of body pump classes for mum at FF Lane Cove, but I could barely move my legs after yesterday’s Abs, Bums and Thighs class (after more than 3 months of no gym Fridays). While everyone else is still stuck on the bed and contemplating on the only 2 sane choices on a weekend morning – lie in, or get up? (although not an early start of 8:30am), Mum was up and about in the kitchen fussing with breakfast and more than excited about the cold dough kept in the refrigerator overnight.

While Dad and you girls were still glued inside the bedroom (you playing with your DS’, Ate with her I-Touch and Dad snoring away the morning), Mum was in the kitchen quietly doing some arm and shoulder exercises – kneading the dough and rolling to thin-dom come.

This recipe was adapted from Debbie of joythebaker.com where her instructions were to the very tiniest detail. I tried as much as I could, to thin out the dough with the rolling pin, but either it’s the excitement of baking them or the sheer stress of my still-lethargic-triceps. The square strips were not as thin as joythebaker’s photos, and so it must follow that it will not fit in a 9in loaf tin, as did hers. I tried to squeeze them all in to form a proper line up, but as nature would allow, it could only fit in wayward fashion.

And so, this is my version of joythebaker’s cinnamon sugar pull apart loaf, in mismatched proportions. 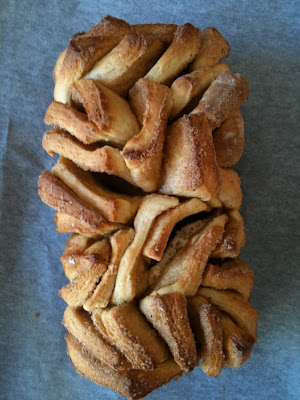 I did skimp on the cinnamon sugar that I have to throw out a significant bit. This was obvious in the loaf slices as the butter and cinnamon sugar thinned out during the baking process. Next time, I will be more generous in my sprinkling of sweets and of course work out my triceps longer with the goal of thinning the loaf more and get more even slices.

Despite the randomness of the fit and the sizes, the bread turned out just as good as any home made bread would, accompanied with the aroma of butter and cinnamon and its pure bread heaven! I must also mention that this, by far, is the easiest bread/loaf recipe I’ve ever met. I didn’t even use the stand-mixer for this. 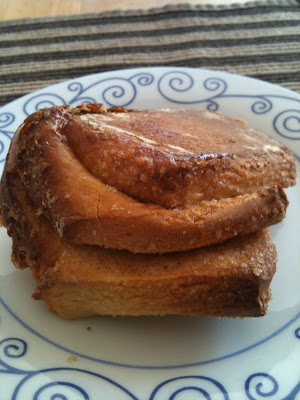 Here is the recipe from joythebaker, adapted from hungrygirlporvida

In a large mixing bowl (I used just the bowl of my stand mixer) whisk together 2 cups flour, sugar, yeast, and salt. Set aside.

Whisk together eggs and set aside.

In a small saucepan, melt together milk and butter until butter has just melted. Remove from the heat and add water and vanilla extract. Let mixture stand for a minute or two, or until the mixture registers 115 to 125 degrees F.

Pour the milk mixture into the dry ingredients and mix with a spatula. Add the eggs and stir the mixture until the eggs are incorporated into the batter. The eggs will feel soupy and it’ll seem like the dough and the eggs are never going to come together. Keep stirring. Add the remaining 3/4 cup of flour and stir with the spatula for about 2 minutes. The mixture will be sticky. That’s just right.

Place the dough is a large, greased bowl. Cover with plastic wrap and a clean kitchen towel. Place in a warm space and allow to rest until doubled in size, about 1 hour. *The dough can be risen until doubled in size, then refrigerated overnight for use in the morning. If you’re using this method, just let the dough rest on the counter for 30 minutes before following the roll-out directions below.

While the dough rises, whisk together the sugar, cinnamon and nutmeg for the filling. Set aside. Melt 2 ounces of butter until browned. Set aside. Grease and flour a 9x5x3-inch loaf pan. Set that aside too.

Deflate the risen dough and knead about 2 tablespoons of flour into the dough. Cover with a clean kitchen towel and let rest for 5 minutes. On a lightly floured work surface, use a rolling pin to roll the dough out. The dough should be 12-inches tall and about 20-inches long. If you can’t get the dough to 20-inches long… that’s okay. Just roll it as large as the dough will go. Use a pastry brush to spread melted butter across all of the dough. Sprinkle with all of the sugar and cinnamon mixture. It might seem like a lot of sugar. Seriously? Just go for it.

Slice the dough vertically, into six equal-sized strips. Stack the strips on top of one another and slice the stack into six equal slices once again. You’ll have six stacks of six squares. Layer the dough squares in the loaf pan like a flip-book. Place a kitchen towel over the loaf pan and allow in a warm place for 30 to 45 minutes or until almost doubled in size.

Remove from the oven and allow to rest for 20 to 30 minutes. Run a butter knife around the edges of the pan to loosen the bread and invert onto a clean board. Place a cake stand or cake plate on top of the upside down loaf, and carefully invert so it’s right side up.

PS - Today is also the birthday of Tita D whom you met during our recent holiday in the Philippines. Here's a gorgeous rustic cinnamon bread for you Tita D! 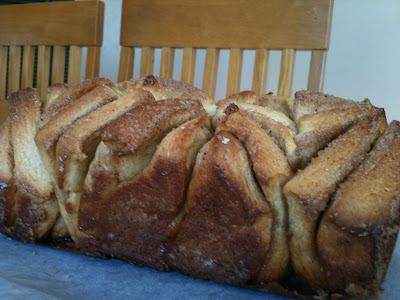