A food odyssey - Rick Stein's that is 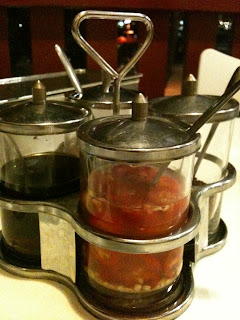 This also includes my 2-cents for Sailor’s Thai Canteen at The Rocks!  Great Thai cuisine!  Great price!  Great staff!   A definite comeback to try the Sailor’s Thai Restaurant next time!  That prawn curry was fantastic in the hottest sort of way!
Much to my surprise, Dad gave me 2 tickets to see Rick Stein’s Food Odyssey at the Opera House!  I was also surprised when he did not want to go.  Well.  As you all know, dad isn’t that keen in the kitchen.  He’s just keen on eating what comes out of the kitchen. LOL.  Tell me I’m wrong?!  Come on.  Still a big thanks to Dad for the tickets, as if it were not free, I never would have considered going out on a cold autumn Monday for a cooking demonstration.
Well anyway, he did have these tickets which he won from the local paper.  Great timing.  School holidays and this was just the hit I needed to stay in the foodie circuit .  And so mum went with Tita C.  We had a lovely Thai dinner at Sailors Thai Canteen at The Rocks before the show. 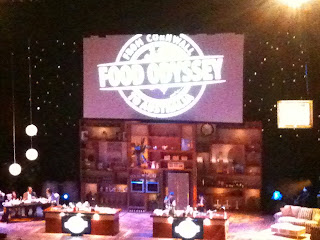 I knew Rick Stein from reviews of his restaurant in Mollymook called Bannister’s.  During our long weekend trip to the South Coast in 2009, I actually wanted to take you guys plus Lolo and Lola for some lunch or dinner at his place, but from the website, it looked to posh and quiet and not something we could go to like we’re having fish and chips.  His restaurant does offer local seafood from the Ulladulla and surrounds, but I found it too pricey to bring kids who I know will not finish their $25++ worth of meal.  So we didn’t.
At the show, I didn’t expect there would so much people who will actually watch Rick Stein at 8pm on a Monday, talking about his food adventures around the globe and doing some food demonstrations.  Another surprise!  The concert hall of the SOH was packed full.  Rick Stein merchandise and cookbooks were in the foyer for sale, and people were just buzzing around before the show.  I guess with fellow food lovers.  What a great feeling!  To be surround by people who have similar likes – FOOD!
The show was fantastic. Great stories. Amazing food adventures. 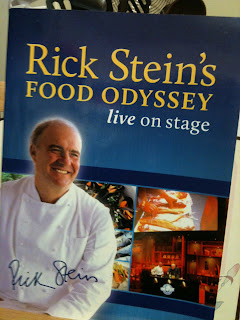