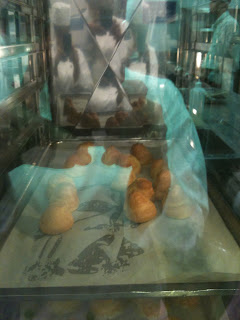 Lesson 8 - Baking profiteroles @ Kitchen 10 - and me in my uniform
Lesson 8 @ Kitchen 10 was cut short because of a scheduled Yum Cha Masterclass featuring a chef from Manly Phoenix (of whose name now eludes me, as I'm writing this in retrospect, weeks after the class , which actually should have been posted before Lesson 9).   But I can vividly remember this day as we made these lovely profiteroles before heading off to the Masterclass at 6:30pm.  The Yum Cha masterclass was all about making roasted pork pastry and bbq pork buns.  In Filipino cuisine, these are known as siopao.  We all got free recipes to make the pork buns but reading it is like reading a dictionary. Too many words.  Too much waiting time.  Its like watching a movie that's too much talk and less action, you'd actually doze off.  In short, the process of making pork buns are just so time consuming that it one maybe better off going out for a real Yum Cha.  So maybe, a practice on making this Chinese delicacy can be put off for another time. 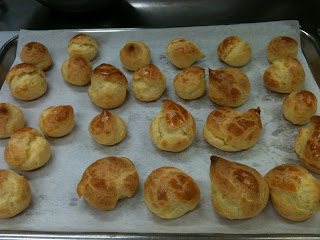 Lesson 8 - Baking profiteroles @ Kitchen 10
(These were my batch which looked like small round buns.  The shiny brown top is attributed to the egg wash finish)

These were the batch which my benchmate at the time (Sam) made, which more closely resembled Chef D's.  There were supposed to look like these really. 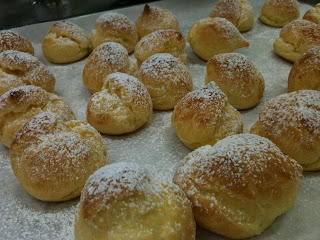 After some dusting of icing sugar & the chantilly cream squeezed inside, they already looked fantastic!

Profiteroles are also called cream puffs in American cuisine and is made up of a basic choux paste which is a light pastry dough and chantilly cream.  The basic choux is also the same pastry used for the French pastry creation called croquembouche - that monstrous pyramid creation that was a part of the first series of Masterchef Australia.

This was not the first time for mum to make profiteroles as we made them years ago, one Easter weekend using an Usborne children's recipe book.  This time though, the excitement is still present, because there is that experience of making chantilly cream and the sauce suchard, while not entirely new to mum's palate, are new to my ears.  I'm getting the hang of these French culinary terms!  Buon appetit! 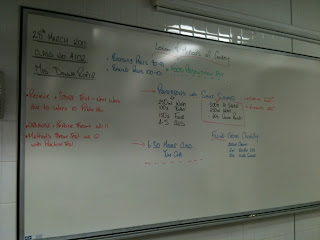 The recipe for the profiteroles are on the board, but here they are anyway taken from the textbook -Organise and Prepare Food Methods of Cookery Series 3.

Choux Paste (Basic)
Serves 15
250 ml water/milk
(Chef D said it doesn't really affect the consistency of the finished product, so water or milk)
100g butter
150g flour
4 eggs (60g)
salt
1. Boil the liquid and fat in a saucepan, take off the heat and add the sifted flour.    Stir with a wooden spoon and return to heat, mixing until the batter comes off the sides of the pan.
2. Work on the stove until a white layer is formed on the bottom of the pan.
3. Cool to room temperature and add the eggs one at a time.
(When we did this, we added the eggs one a time, while the pan is still on the stove top under low heat and making sure the eggs are cooked through into the dough batter.)

4. Pipe the mixture onto a greased tray, 3cm diameter rounds (we used disposable piping bags and piped in rounds with tips)


5. Tap the tips with egg wash or water and bake at a pre-heated oven to 180 degrees C.  Do not open the oven for the first 10 minutes (this was in the book, but in all baking efforts, I think its best not to open the oven as it compromises the results of your baked goods.  In most cases, it deflates the cake or cupcake or pastry)
6. Bake for 15-20 minutes until the pastry feels light and dry in the centre.  Cool and set aside.
This is then left to cool while we prepare the Chantilly Cream
250 ml cream
25g or less, icing sugar
1 ml vanilla essence
1. Whip the cream to a very soft peak using a whisk (lots of elbow grease we did here, or alternatively use a stand mixer or hand mixer)
2. Add the sifted icing sugar to taste.
3. Add the vanilla essence and whip to the desired consistency. (the cream should look like a thick soft cream, something like the consistency of the store-bought whipped cream.  Light but not too fluffy)

For food presentation and for added sweetness, we prepare the sauce suchard which can be drizzled over the stuffed pastry, or decorated on the plate as we did.  To make the sauce suchard, in a saucepan mix together: 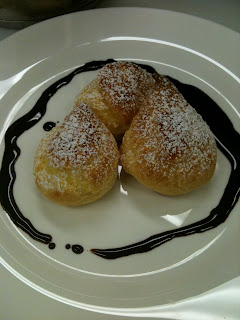 And these were the finished profiteroles, presented with some Sauce Suchard (or chocolate sauce in English parlance).
A true work of kitchen art.

The chocolate sauce in this instance is made of cocoa and therefore were a bit less thick that how I would have pictured a profiterole or chocolate eclairs.  Maybe to get a thicker sauce, thickened cream can be used to make the sauce.  Sounds like a good idea, but yet to test.  So we'll keep this posted for future profiterole baking at home.