The loooonnnnggg weekend which covered Good Friday to Easter Sunday, and then ANZAC Day on Monday and an extension to Easter Tuesday left mum clinging to sanity.  Yes!  Besides the 2 whole weeks of school holidays which left all of you bored to crazy at home (sorry guys that mum  had to work those days as I was saving for your 888 movie date and some other things that needed attention), we were lucky to have a little more extension to the holidays.  And as it is autumn, and the chills are creeping bit by bit, I had a sudden inspiration to try and make molo soup.  What else is there to do at home, on a wet and chilly autumn weekend?


We have never ever tried making molo before.  Molo is simply dumplings in soup.  The addition of the pancit in the dish’ name is a puzzle as I tried to fathom where the pancit/noodles go.  But in this case, there isn’t any kind of noodles included in the dish.  I believe the molo which is wrapped in gowgee or wonton wrapper becomes the noodles in itself.  A had a lovely time helping out mixing the mince and wrapping the molo.  Mum had to coin the name gowgee to make it even more interesting as you guys love gowgee (the dumpling variety which is made with prawns we usually have at yum cha places).


This took about 3 hours in the making – from the preparation to the wrapping to the actual dish cooked.  Didn’t actually realise it was that long until everyone started raiding the pantry for some snacks. It was late afternoon, almost dinner time!  Ah. Just in time to warm up the body.  And for those not interested in the soup, some prawn gowgee on the side! 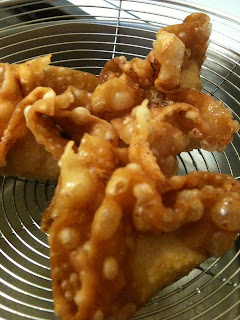 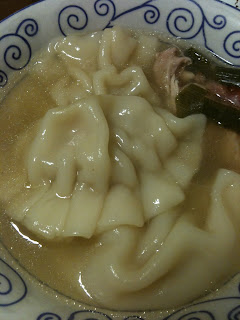 We had so much left over from the mixture that I’ve kept them and wrapped them up in wonton wrapper a day after, and voila! Fried dumplings!  Best served with sweet chilli dipping sauce!
This recipe is adapted from home cooking rocks!  But tweaked a bit for mum's inspired version of Pancit Molo soup for a wet and chilly autumn dinner.
500g minced pork
12 pcs chopped prawns
half part chicken breast, thinly sliced
1 onion, finely chopped
1 carrot, grated
2 stalks onion leaves, chopped finely
1/4 tsp grated ginger (mum used ginger the size of a thumb), chopped finely
salt and pepper to taste
1 egg, beaten
Mix all above ingredients together in a large bowl by hand.   Or alternatively, use a food processor to mince, dice, chopped and mix all the ingredients together.
Using store bought wonton (square) or gowgee (round) wrapper, place a tsp of the mince mixture in a wrapper and seal by folding the sides in a pinching fashion.
Set aside.
To make the stock, Mum used about 125g of smoked pork bones (store bought) and 125g of chicken bones with 1 quartered onion.  The stock may take an hour to infuse the flavour of he smoked pork and the chicken.  Flavour the stock with salt and pepper, and some fish sauce.
Once the stock is infused with the flavours, strain using a fine sieve to remove the bones and other impurities. Set aside.
In a separate sauce pan (large enough), saute 1 clove garlic and 1 onion quartered, until soft. Add the broth and bring to a boil.  Add the molo/dumplings/gowgee and simmer until the molo floats in the broth. Add green leafy vegetables such as bok choy and some onion leaves.
Serve warm with lots of love and hugs!
Posted by annabanana at 11:33:00 pm