I  am getting addicted browsing Pinterest.  Its so inspiring to see so much beautiful food, awesome places to go to, DIY projects to do, fashion, and just about anything that’s amusing to the senses.  The creator of this great website is a genius!  Pinterest is a place where you create your own virtual pin board (just like you would have at home) and pin just about anything that inspires you.  I’ve created a board for food that I might want to tackle in the kitchen someday, DIY projects that I might want to for the home and with the kids, travel places, awesome images, and so much more.  It’s suddenly replacing my obsession with FB.  I know, right.  At this age, its not right.  Well, I’m not really FB obsessed, but I browse there every day – just for the sake of getting in touch with family and friends overseas really.

And how in the name of bread and butter did I get hooked on Pinterest?  It’s because of these bread rolls!  As I said, the photos in Pinterest are so inspiring, this has inspired me to: make the cinnamon rolls, so that I can have the dough for these buttered dinner rolls, and it also sent me hunting for a good 20cm cast iron pan, which I eventually got from Amazon (of all places!) and so now these glorious breads are waiting to be made and eaten, and made and eaten, and made and eaten.  It’s the cycle that must BE.
When I found this recipe, I just had to make it.  But I didn't have the cast-iron skillet and so had to procrastinate much longer.  But we've tried it at home several times already even before the 20cm  cast iron pan arrived.  First using a basic stainless steel 30cm pan (photo above), and then using a  large cast iron pan  - 27cm and baked as regular dinner rolls (below). 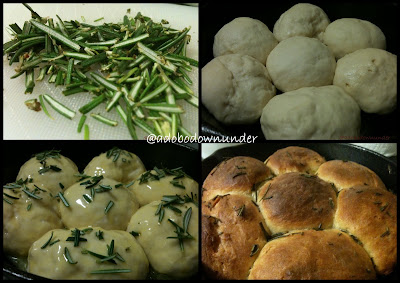 To make these dinner rolls, I used the dough from the Cinnamon rolls recipe (which I also got from PW).  I actually made more cinnamon rolls, just so we could get our hands on this dough!


Melted butter, for brushing
sprig of rosemary, chopped from the stems
sea salt
Using a 20cm cast iron pan/skillet (or maybe a 20cm round baking pan will do fine - although I haven't tried), brush the pan with some olive oil using paper towels and smooth it over.
Scoop a large spoonful of the dough and roll into rounds.  Place in the pan about 7 pieces with enough space to expand.  Let it rest for 20-30 minutes, covered with a tea towel in a warm place (I place them in the microwave).
Brush some butter over the rolls, and sprinkle the rosemary and some salt.
Bake in a preheated  (180 degrees C) for 15-20 minutes or until golden.
Brush some more butter before serving.
Posted by annabanana at 10:05:00 pm

Email ThisBlogThis!Share to TwitterShare to FacebookShare to Pinterest
Tags bread