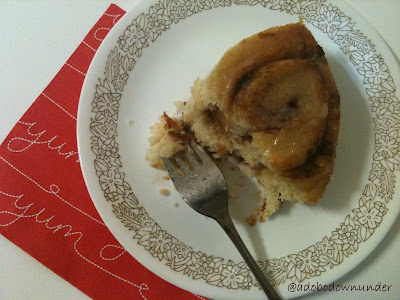 Thanks to the Pioneer Woman, I now have a good following of fans.  Cinnamon roll fans that is.  I must make more of it and maybe run as a local member in parliament!  Well not quite that big in terms of network.  But at least in the small corner of the government agency where I work.  Slowly, I will infiltrate the cinnamon rolls business and expand.  Good plan. Big bucks!  Mwa ha ha ha!   I took PW’s suggestion.  Make these and spread the love, amongst your family, friends and accolades.  And among other things, you will be worshipped by worthy followers!

I love Ree Drummond’s blog.  She’s so candid and funny, and the fact that she lives in a farm and wearing boots and a cowboy hat at most times, makes me love her more.  I admire women who live ins farms, keeps a home, and still have time to keep the kitchen humming to feed a family!  And she does!  With great passion!  And that’s how she is – the pioneer woman.   Of all places, I discovered her blog through Pinterest.  A saw these lovely buttered rosemary dinner rolls and I knew I just had to make it.  It took some time to hunt her down because it was a photo repinned by someone else, who got it from someone who also repinned it and so on…..  but it was all worth the hunt.  Because besides discovering her recipe for the buttered rosemary dinner rolls, I also found this 101 on cinnamon rolls  including some notes and so many more glorious recipes, all flagged/bookmarked for those weekend and school holiday cooking projects.  There's an exciting world of foodies out there! 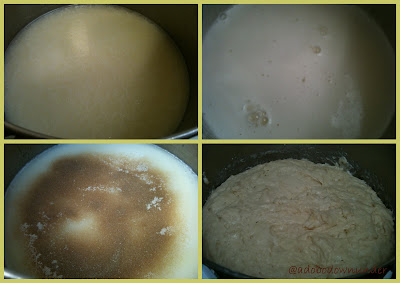 Dough
4 cups full cream milk
1 cup vegetable oil
1 cup caster sugar
15g (about 2 and half tbsp) active dry yeast
8 cups all purpose flour + 1 cup extra
1 tsp baking powder
3/4 tsp (scant) baking soda
1 (heaping) tbsp table salt
Filling
50g butter, melted
ground cinnamon (no limit to your sprinkling ability)
Icing/Glaze
1 - 500g pack icing sugar
1 tsp vanilla essence (we don't have maple flavouring in Oz)
1/4 cup very strong coffee
50g melted butter
To make the dough, heat the milk, vegetable oil and caster sugar in a large pot  (keep in mind that the 4-cup flour/dough will rise in this same pot, so use a big one) until just before boiling point.  Stir the mixture a bit to dissolve the sugar.  Turn off heat and let it cool - 45 minutes to 1 hour.
When the mixture is luke warm (not hot), sprinkle in the active dry yeast.  (Do not stir at this point).  Let it sit for a minute.
Add the 8 cups flour and stir to combine.  Cover and let sit for an hour.
Add the extra 1 cup flour, baking powder, baking soda and salt and stir together.  The dough will be wet and sticky.
PS - At this point, PW suggests two things: you can either 1) proceed to making the rolls, or 2) keep the dough in the fridge overnight or a day or two, until you need it.
To make the rolls, get half of the dough and roll it into a rectangle on a lightly floured surface until about 2mm thick.
Brush the rolled dough with butter then sprinkle with ground cinnamon.  (I found that the melted butter was oozing out of the sides as we rolled the dough, so maybe next time, we'll just brush it with softened butter)
Starting from the opposite end, roll the dough towards you, keeping the dough tight as you roll.  Pinch the seams to seal the edges.
Cut the dough into 3/4 - 1inch thick rolls.  Lightly butter 3 round 8in cake tins(we bought foil cake tins for this).  Place the rolls neatly spaced in the tins and let it rise for 20-30 minutes.
Bake in a 180 degrees C pre-heated oven for 15-20 minutes, until golden.
To make the glaze, combine the icing sugar, melted butter, vanilla essence and coffee in a large bowl and whisk until smooth.
Spread on top of the warm cinnamon rolls, then spread happiness all around. 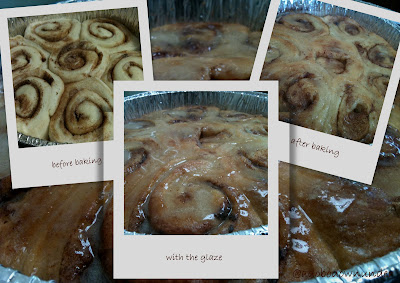 I have made cinnamon rolls before, but this one is spot-on easy in terms of its one-pot dough wonder.  You heat the milk, sugar and oil in a pot.  Add the yeast and flour and rest!  How easy is that?!  Of course you need a little elbow grease when you add the flour as it becomes a sticky gooey mess, and you only use a wooden spoon.  But that’s about it.  After resting, a little of effort on rolling the down and then spreading it with love – butter, sugar and cinnamon!  Cut into 2cm thick rounds and arrange in a dish and bake away!  A few more minutes of waiting and what you’ll have is your ticket to stardom!  Delicious melt-in-the-mouth cinnamon rolls with that coffee flavoured glaze.  Serious business. 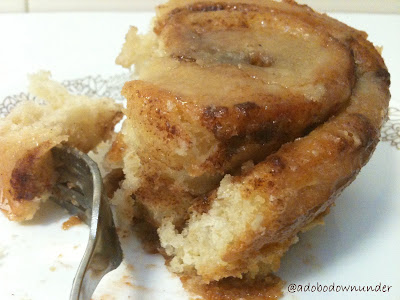 We made this one weekend, and I’m just lucky that the girls are always keen and ready to help with whatever.  Whether its just getting the ingredients off the pantry, cracking eggs into a bowl, stirring a gooey sticky dough, or washing up. Well, pretending to wash up while playing in the kitchen sink.  All help is always welcomed and appreciated. Well, you can't possibly think there's no mess behind all these cooking, do you?  Even the Pioneer Woman agrees! 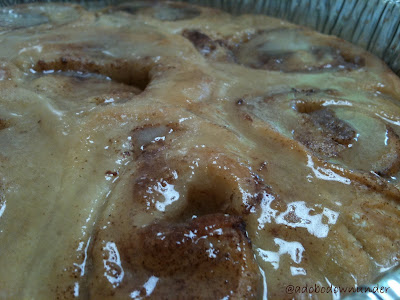