Upside down pear and chocolate cake 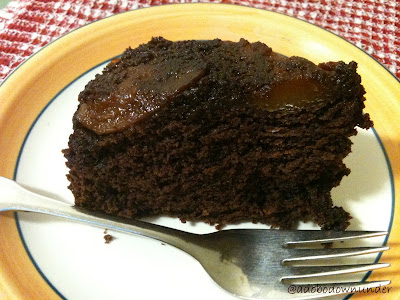 I have been feeling a bit stressed lately.  Down and grumpy and old and blue.  There was no other way but to turn on the kitchen oven and take out the dark chocolate blocks and make something.  Stirring and whisking, melting and creaming. It all seems to take off some of the heavy tough knots on my shoulders and eases things a bit.   While shopping is therapeutic for others, being in the kitchen and creating something is for me.  I don't mind a bit of retail therapy too, but most of the time, I just end up purchasing some kind of food item or a kitchen gadget.  Being in the kitchen calms me. That's it. 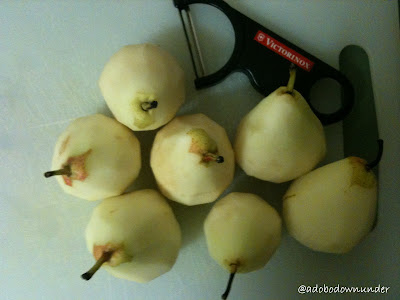 We had 7 pieces of Corella pears idly seeking for attention in our fruit basket for what seemed like weeks now.  So I thought I should give them some tender loving care  and marry them with some chocolate and make cake!  Amazingly they were still crisp as I was peeling the skins off.   I planned to make a pear and chocolate clafouti but thought an upside-down cake would be easier.  I found a recipe from epicurean.com where you don’t have to caramelise the fruits, which should be easy.  But ended up adapting this recipe from epicurious.com.  I don’t know how my choices were decided on, considering we only had regular variety of cocoa in our pantry.  I think because the photos of the lovely pear arranged in a fan-like design made it more attractive.   I thought upside down cakes were only great with pineapple.  But I’m wrong.

This recipe is by Cory Shreiber and Julie Richardson adapted from epicurious.com

Fruit topping
6 pieces Corella pears, peeled, cored and cut into thin wedges
¾ cup caster sugar (the recipe called for 1 cup granulated sugar)
¼ cup water (this was not in the list of ingredients unfortunately, but was highlighted in the comments portion to have been overlooked)


Over medium heat, place the water and sugar in a small saucepan and stir until the sugar dissolves.

Bring to a boil then cook and cover for 2 minutes.  Take lid off and continue to boil, swirling the pan gently and slowly to cook the caramel evenly.

Once the caramel becomes dark amber in colour, it is done.

Carefully pour the caramel into the cake tin/pan, swirling the pan to cover the base.

Arrange the pear slices on the caramel in a circling motion, including the centre.  (or you can also choose to place the pears in mismatched arrangement).  The caramel will harden like toffee.


Melt the butter and chocolate in a small saucepan over low heat, stirring occasionally to make sure the chocolate and butter has melted. Remove from heat.

In a medium sized bowl, sift the flour, cocoa, baking soda and sugar.

Transfer the melted chocolate into a separate mixing bowl and add the sugar.  Using a handheld mixer, beat on medium speed for 3 minutes, until light and fluffy.

Add the eggs one at a time, beating after every addition.  Stir in the vanilla.

Stir in the flour in three additions, alternating with the milk.

Pour the batter into the prepared pan and bake in the oven for 40-45 minutes, or until the cake bounces back slightly when touched.  Cool on a wire rack for 15 minutes then invert the cake onto a plate.

The cake turned out not as gorgeous looking as the one in the site.  I did use a smaller pan (8in round cake tin) as opposed to what was recommended.

I also was not able to arrange the pears nicely.  First because I used a cake tin with a removable bottom and then found the caramel seeping through while I was preparing the batter.

Secondly, I then had to transfer the caramel and the fruit onto another cake pan, in a plonking manner.  Tipped the other pan over onto the next pan and plonked.  And so the pears were in mismatched haphazard direction.  It did taste good though.

The cake is moist with a super-duper sweet caramelised fruit topping, like a candy-frosting for a birthday cake.  Although it does blend well with the cake, almost like a streusel.  I might just try it again this time with more precision in the equipment and the pear arrangements.  Pears are in season so it’s a good time to do lots of upside down experiments with different fruits! 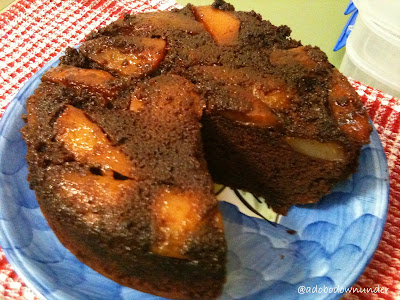 This cake is extremely sweet. Which means it must go well with coffee or tea, and accompanied with a dollop of whipped cream (Chantilly cream as recommended and/or vanilla ice cream).
Posted by annabanana at 10:20:00 pm