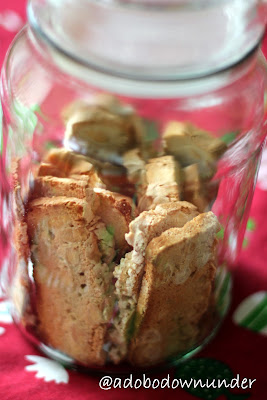 As its approaching Christmas, there’s been an accumulation of lists on our refrigerator door. Evolving wish lists from the girls which they place there and add a few as wishes pop into their little heads.  More puffles and Club Penguin stuff mostly take up the space.  A few books and some art stuff.  B who is now 14 has announced that she doesn’t need a list this year and that she’s only wishing for 1 thing: an iPhone 4S.  Don't we all?!  I mean, how amazing is Siri, right?!  Ah. Christmas.  Silly season indeed.  The season that brings out one's inner child. 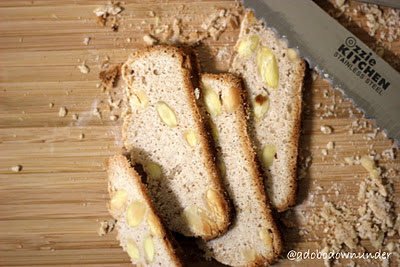 For what seems like ages, it has been my plan to make home-made goodies as Christmas presents to friends and families.  Despite the depleting inventory of my reused jar collection, Christmases have come and gone and no home-made goodies left our home as cute-gourmet presents.   Most of them have found solace and company in lollies and gummies, some cookies, left-over baking ingredients, sugar, flour and other staples.  They are serving their purpose for now.  And then finally, a light bulb lit in the form of Almond bread!


A few weeks back, in one of the lessons in Kitchen 11, Chef A had one of us make some almond bread to accompany the dessert for the day .  He had this tried and tested recipe from his files which turned out nice and crispy almond breads/biscuits similar to the Italian biscotti.    I’ve been meaning to make them since.  When SMH featured them last month in Cuisine, that was it.  These are the easiest home made gifts for Christmas. 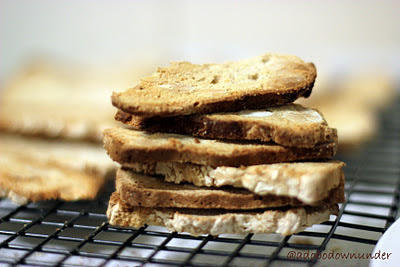 I’ve tried them twice.  The first time did not turn out good – the bread was crumbly when I started to cut them with a serrated knife (bread knife) which can only mean I’ve over-baked it.  And so a second attempt was obviously in order.   This one turned out just right.   After 20 minutes in the oven, the bread is still soft, cooled and then kept in the fridge overnight.  Using a bread knife/serrated knife, the bread is cut thinly and then baked for another 5 minutes or until crisp. 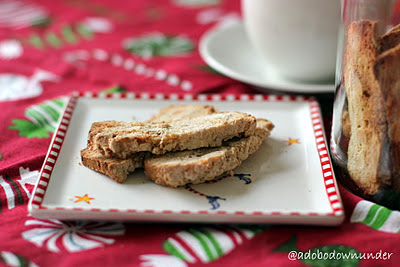 You can use store bought blanched almonds here, or you can buy almonds with the skin on.  Simply boil some water, then simmer the almonds gently for about 5 minutes.  Once a bit cool, you can squeeze the skins off the almonds and they will come off easily.


This recipe is adapted from Chef A's collection of tried and tested kitchen recipes which he quietly shared in Kitchen 11.


2 egg whites
1/2 tsp salt
120g caster sugar
120g plain flour
120g whole blanched almonds
1/2 tsp ground cinnamon
Preheat the oven to 180* C.
Grease and line a loaf baking pan or a disposable aluminum loaf tray.
Using a stand mixer or hand-held beater, beat egg whites with salt until frothy or foamy.
Slowly add the sugar (a tablespoon at a time) and continue beating to form a meringue.
Using a spatula, gently fold in the flour, almonds and cinnamon.
Spoon the mixture into the tin and bake for 30-40 minutes at 180* C. (I've baked them for 20 minutes because we have a crazy oven that fluctuates its temperature as it breathes.  If you have a trust worthy oven, just follow the actual recipe of 30 minutes, then check every 5 minutes to make sure the bread has not burned.  The bread should be cooked but pale in colour.)
Cool  on a wire rack, then wrap in cling film or foil and place in the freezer for 1 hour  (or in the fridge overnight).
Slice thinly with a serrated knife and place on a baking tray.
Bake in 140*  C preheated oven until crisp or for 5 minutes.
Store in an airtight container.
The inspiration to make home-made Christmas presents came when I saw these mouth-watering divine caramel sauce from the Betty Croker website via Pinterest.   The one important thing to consider when making edible gifts is the shelf-life of the food.  For which the caramel sauce reviews and feedback was not as I had hoped for.  So, I'm betting my wooden spoons on these breads/biscuits!


How about you?  What are your Christmas gift giving plans this year?  Do you like making home-made edible presents?  Would you like it if you got one of these jars for Christmas? 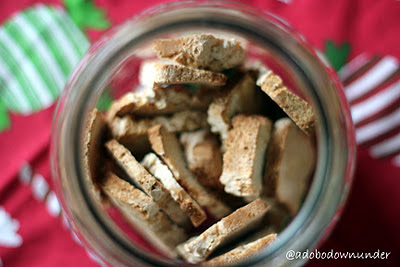