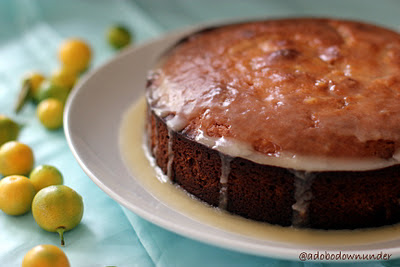 We had a lovely weekend with the Oandasan’s at Ropes Crossing and then spent the entire Sunday spring cleaning for the quarterly Ryde Council Clean Up day.  Its amazing how much junk we hold on to. After a quarter, we still have stuff to get rid off like empty boxes from purchases (aka stand mixer, rice cooker, etc etc)!  Why in the world we keep those empty boxes puzzles me.  We keep them up for a few months, but then throw them away after a few. Ah. The human mind is indeed perplexing.
When D gave me these gorgeous green and yellow calamansi last week, I had no plans with them except for the occasional juice and some squeezed in soy sauce for a traditional dip with pork skewer bbq.  But when Trisha of Sugarlace tweeted about a calamansi cake, it was an “Aha why not!” moment!  I have had a recipe for lemon yoghurt cake which we usually make when lemons abound so the calamansi was a trial-and-error idea.  And while calamansi are too small to get some rind of these beauties, we still used some lemon rind and maximized on the calamansi juice for the flavour.
Calamansi is a Filipino indigenous lime variety, which is similar to the local cumquats.  Its seldom that these are available locally – either you get a small snack-pack size zip lock bag for $2 at Filipino shops, or you can get them by the kilo courtesy of friends like D.   Thank God for friends! 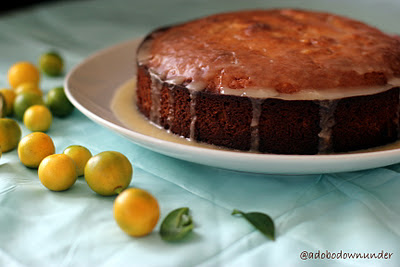 The recipe I used for the cake is the Lemon Yoghurt Cake posted awhile back with ingredients obviously tweaked and substituted and adapted the calamansi glaze/icing from Sugarlace’s post.
1 and 3/4 cups sugar

Pour into a 20cm cake pan and bake at 180 degrees C for 30 minutes or until a skewer comes out clean.

Cool on a wire rack for about 15 mintues or more.

Glaze/ice the cake when the cake is entirely cool.
Calamansi Glaze/Icing
1 cup icing sugar
3 tbsp calamansi juice
Mix with a whisk in a small bowl until smooth.
Like all sweet and tangy combo cakes, it takes a mature palate to take in the taste.  The calamansi flavour actually kicks in each bite.  A very distinct flavour from lemon or lime.   The cake is moist, sweet and just a tad bit tangy.      A somewhat Filipino cake, dressed in Oz. 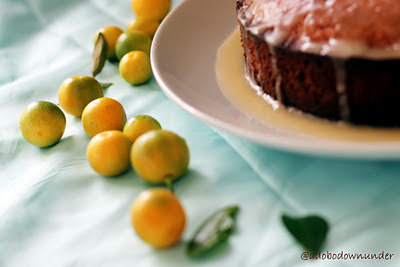 PS - This is my first attempt at actual food styling - used a pale blue fabric off cut.  After listening to Peter from Souvlaki for the Soul during the conference workshop and reading more of his brilliant tips from his latest post, I've been hunting around second hand shops looking for those odd vintage and classic pieces.  I just hope I'll be able to stop to catch up on some more cooking! It does get kind of addictive!
Posted by annabanana at 11:02:00 pm