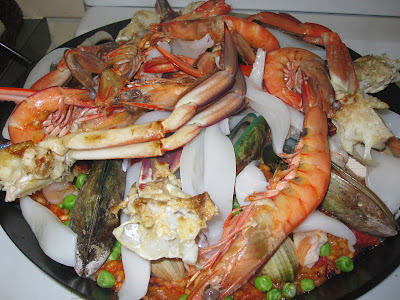 School holiday weekends are exciting, fun and just full on. First excitement – we survived or first ever group sleep over. Well, 2 additional teenage girls in the house already seemed like an overnight spell of shrieking and screaming and non-stop lolly eating. It wasn’t as bad as I thought. The girls watched DVD all night and managed to sleep as early as I would have thought. It was pajama day for Bianca, Holly and Jess. We did our own little party playing Junior Charades in the bedroom lasting until 11pm. Yes, school holiday weekends can just be crazy.

Another good thing is the sun peeked in a few hours which was great for those short outdoor games played with Dad in the backyard – which lately has been basketball. I snuck out from the frenzy at home and managed to squeeze in a trip to the gym. Did I say school holidays also make my gym trips more sporadic? 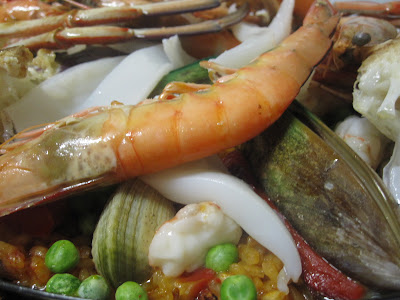 While Sunday was lazy and the overcast weather and winter chills made us more lethargic, there was excitement on TV. Paul the Octopus has predicted a Spanish win over the Dutch in the 2010 FIFA World Cup Finals. And what a lovely time to celebrate our Spanish heritage (Did you know the Philippines was influenced by the arrival of the Spaniards in the country in 1565, and this is not limited to culinary influence. You wouldn’t know this unless you went to school in the PI, but eventually you will understand and appreciate our colourful Filipino heritage. Maybe a historical post some time in the future?). So, with enviro bag and cooler in hand, I headed off with A and S to the Sydney Seafood Market in Pyrmont and The Essential Ingredient in Rozelle to prepare a truly Spanish feast for dinner – Seafood Paella. A and S were not much excited at the prospect of a paella dinner, but were more interested in the hum that goes inside the seafood market plus the overwhelming sizes of the salmon sashimi on offer. Pure seafood heaven! 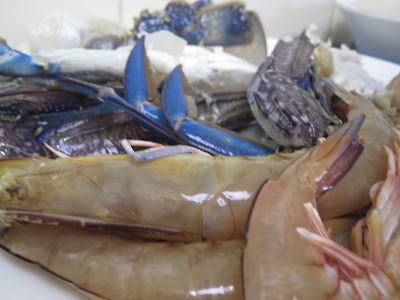 Paella seems to be one of those daunting dishes best put off for special occasions such as Christmas feasts. For me, its goes along with slow cooking roasts and difficult decadent desserts. But when I’m inspired I’m on a roll. The recipe I followed for this dish was the one I got from the Spanish Tapas cooking lesson I took in 2009. I have not had the chance to prepare it since after taking the class and today I was just inspired. Its also time to get those paella pans out from their storage. The last time I used them was when I made the Mushroom Risotto here. I’ve tasted paella several times before from restaurants and once at a former boss’ home. He has Spanish heritage and so when we got invited to his house for dinner, naturally paella was on the menu. I remember he had this massive paella pan which was cooking on top what looked like a big camping stove. Because the paella pan was massive, I remember he kept on stirring and stirring the rice until it was ready. On the contrary, the strict note in the class I took stressed not to “stir the rice while cooking”. So I followed, and not stirring somehow caused some parts of the rice to stick on the pan and had that slightly burnt texture. Nonetheless, it was still a great first attempt success. After this paella episode, I am so in love with a new ingredient – the mighty smoked sweet paprika! The house was just bursting with aromatics when I added this onto the pan. 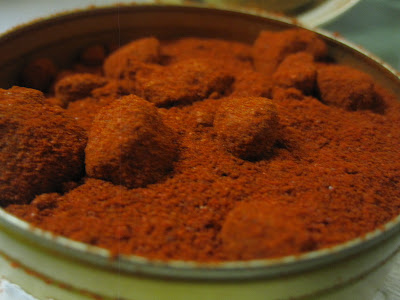 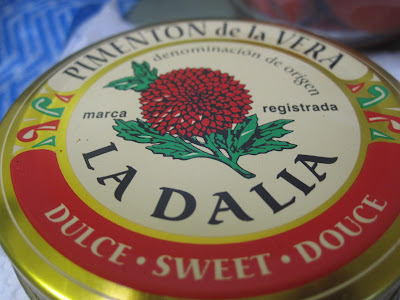 I hope you guys will love this as much as the grown ups did. And for more good news – Spain did win the 2010 FIFA World Cup. Viva Espana! 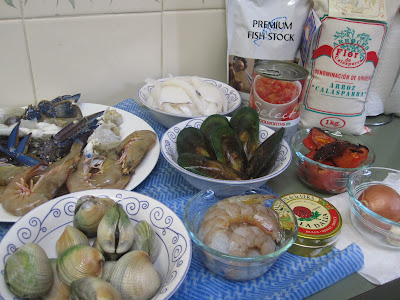 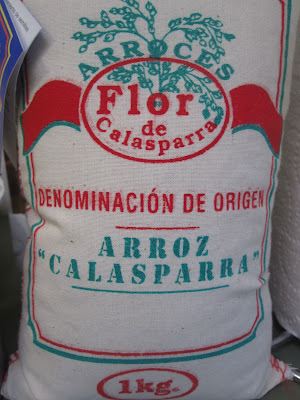 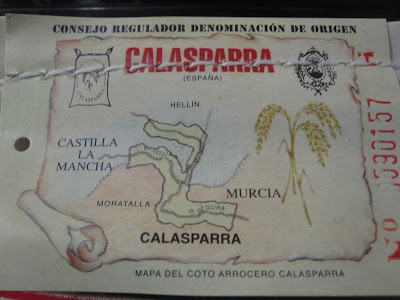 2. Heat some olive oil in paella pan and lightly fry whole prawns and crab just until they change colour.

3. Remove prawns and crab and set aside for decoration.

4. Add extra olive oil to pan. Stir in onion, then garlic, then stir in paprika.

5. Saute until onion is tender.

6. Add tomatoes and cook for a further 5 minutes.

7. Add rice and salt and mix well until the rice is evenly coated.

8. Pour in enough stock (with saffron) to cover contents thoroughly (about 80% of the stock).

9. Cook at a high heat for 5 minutes then reduce the temperature to medium and cook for a further 10-15 minutes. (I reckon cooking in medium heat from the start as this made the paella stick to the pan and slightly burnt)

10. Add extra stock as the rice is cooking as it becomes too dry.

11. Meanwhile, arrange peppers and peas on top of the paella.

12. Add the mussels and sand cockles and cook for a couple of minutes (until the shells have opened up).

13. Add diced prawns and cook, covered for a further 3 minutes. (when I did the cooking class, what we used to cover the pan at this point was a clean dish cloth)

15. Remove pan from heat and allow paella to stand, covered for 5 minutes. 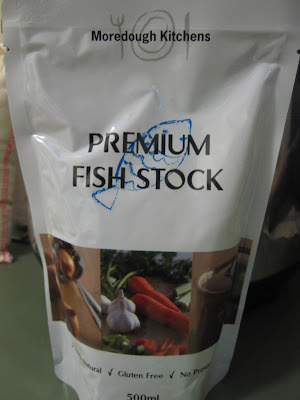 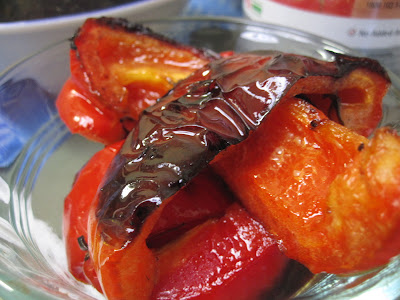 The recipe required the use of preserved Spanish Piquillo peppers which was available at The Essential Ingredient for a hefty price ($24.95 for a 200g can) which I thought was crazy as impractical. I would not be using all 200g so I improvised. I used half of a red capsicum, soaked them in olive oil and grilled in the oven for about 45 minutes. This gave the vegetable that smoky flavour.
Posted by annabanana at 11:26:00 pm