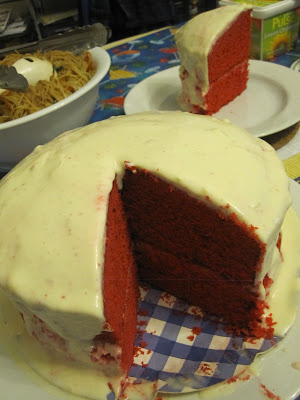 This is a classic American cake recipe, which I got from the Swans Down Cake Flour package. Historically, the red velvet cakes used boiled beets to enhance the colour of the cake. Wikipedia states the red velvet cake was a signature dessert at the Waldorf-Astoria Hotel in New York, where the recipe was spread as a chain letter by a woman, who was allegedly charged a large amount for requesting a copy of the recipe.

I made this cake for Tito Amiel's birthday dinner. The choice of cake was not so much about the colour, but more so because I have been wanting to try something new. And the recipe for this was just as convenient as taking the box of flour from the pantry.

The recipe called for:

2. In a large bowl with an electric mixer, beat together butter and sugar until fluffy. Beat in eggs, one at a time, beating well after each addition. In a small bowl stir together buttermilk and vanilla. Add flour to the butter mixture in batches alternately with buttermilk mixture, beginning and ending with flour mixture and beating until batter is blended well. In another small bowl stir together vinegar and baking soda and gently stir into batter, do not beat.

3. Divide batter between pans and smooth tops. Bake layers in middle of oven 35-40 minutes or until a skewer comes out clean. Cook cake layers in pans or racks 10 minutes before turning out onto racks. Remove paper from cakes and cool completely.

4. Place 1 cake layer on a cake plate and spread evenly with about 1 cup frosting. Top with remaining cake layer and spread remaining frosting evenly over top and sides of cake.

In a small saucepan, stir together milk, flour and cook, stirring occasionally over low heat until thick. Cool milk mixture. In a large bowl with an electric mixer beat together butter, cream cheese, sugar and vanilla until well blended. Add cool milk mixture and beat until spreadable.
The icing's consistency was not spreadable even after so much beating and mixing, as it drooped onto the sides of the cake like a snow avalanche. I think the cream cheese texture must have added to the thin consistency of my icing. 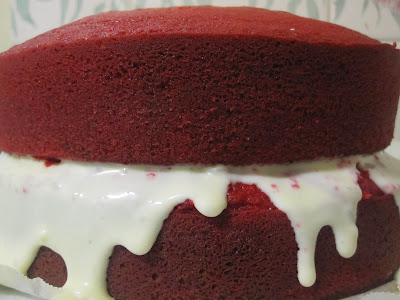 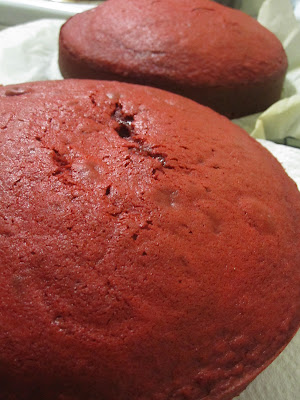 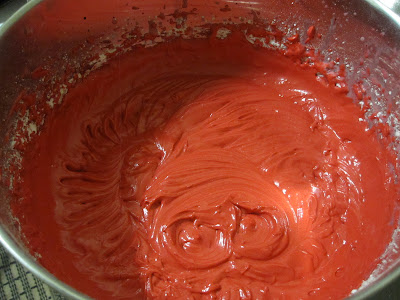 Besides the colour of the cake, this cake did not gather enough fan base to support the effort. The cake tasted really lovely and moist though. I guess it takes a bit of adventure to sink one's teeth into a red cake.
Posted by annabanana at 10:30:00 pm