Sansrival - a Filipino classic for the March SABH 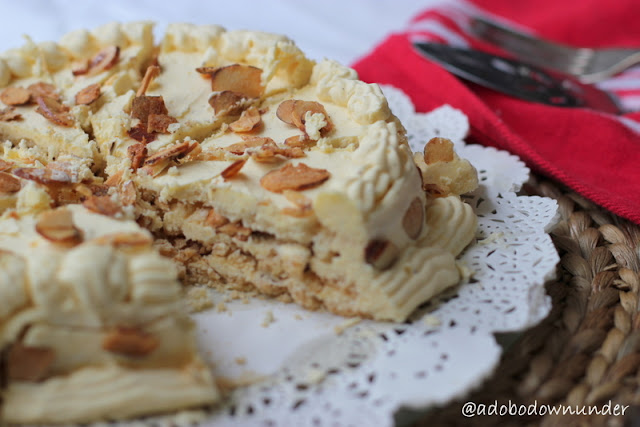 Hello there!  Let me introduce you to one of the most indulgent classic Filipino dessert there is - layers of French buttercream and nutty wafers, covered with slivers of nuts and more buttercream.  Ah. Butter.  Is there anything more indulgent than butter in desserts?  Well, besides the dark chocolate of course. 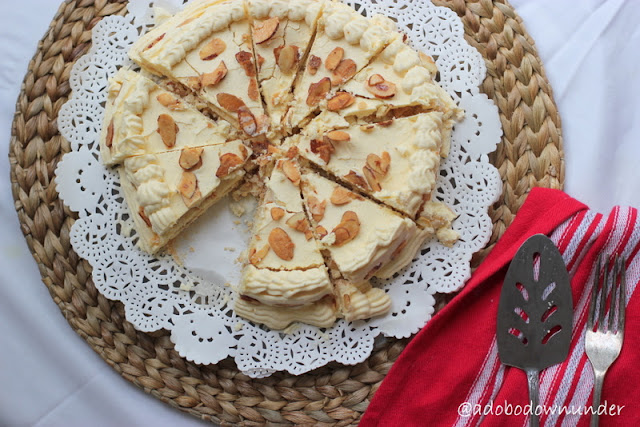 Sansrival (translated would mean "no rival") is a Filipino classic dessert which is traditionally made with ground cashews mixed with egg whites to make a meringue wafer.  This is then layered with cream mousseline which is French buttercream mixed with a cup of chopped cashews.     In an effort to introduce this Filipino dessert to a wider audience,  I've looked at recipes with similar ingredients and method of cooking and found that the French dacquoise closely resembles the elements that goes into making the classic Sansrival.
But as with all classics, we try to make twists and turns to make it more adaptable in terms of ingredient substitution and preparation.  And with that, I give you my version of the Filipino classic, with a French twist.

This post is part of the Sweet Adventures Blog Hop for March with the theme Layer upon Layer, hosted by The Capers of the Kitchen Crusader.
To make this layered dessert takes some planning and time management. Like the chocolate marquise which was my post for the January blog hop.  Each element was tackled a day before the other.  The meringue wafer of dacquoise was made on a Tuesday, the decorator's almond slices on a Wednesday, the French buttercream on a Thursday and the assembly on a Friday.  But don't fret as it doesn't take a whole day to make.  It was just my intention to tackle this as slowly and as peacefully as possible.  I find that when the environment is quiet (everyone asleep or out and about) and relaxed, the results are almost always close to perfect.
To make the meringue wafer, I adapted the Classic Dacquoise recipe
from Flo Braker's The Simple Art of Perfect Baking.
1 pack 110g ground almonds
caster sugar in 3 measurements: 50g, 2 tbsp, 130g
5 egg whites, room temperature
Preheat oven to 108*C.
Prepare two baking sheets.  Line with parchment paper and draw three 8inch circles.  (Use the opposite side of the paper to pipe the meringue so you don't pipe on the pencil markings).
Combine the ground almonds with the 50g sugar in a bowl.  Set aside.
Pour the egg whites into the bowl of a stand mixer, and with the whisk attachment, whip the egg whites on low speed until bubbles appear and it looks frothy.
Increase the speed and add the 2tbsp sugar in a steady stream.  Continue whipping until soft peaks form.
Still on medium speed, gradually add the remaining sugar in a steady stream. Continue whipping until the mixture is smooth.
Sprinkle the almond mixture over the meringue and gently fold with a rubber spatula.
Using a pastry bag with a round tip, pipe three 8in rounds onto the prepared parchment paper, starting from the centre.  (Pipe as many small rounds from the left over meringue to serve as samples when testing for doneness).
Bake in the preheated oven and bake for 65-75minutes or until dry but not coloured.
(Use the small discs/samples to test for doneness. The meringue is ready when the samples are easily released and do not stick from the parchment paper.)
When the meringue is dry, remove from the oven and cool on wire rack by lifting the discs with the parchment paper.
To store, cut around the parchment paper and place in airtight containers and store at room temperature.
The next step is to make the Decorator's Sliced Almonds,  also adapted from the
same book by Flo Braker - The Simple Art of Perfect Baking.
1 large egg white
1 pack 110g sliced almonds
2 tbsp caster sugar
Preheat oven to 165*C.  Prepare baking sheet lined with parchment/baking paper.
Place the egg white in a bowl and pour in the almonds.  Sprinkle the sugar over the almonds and toss with a spatula to coat the nuts.
Spread the coated nuts evenly onto the baking sheet and bake for 20-30 minutes or until lightly toasted and dry. Toss every 5-7 minutes for even toasting.
Remove from rack and cool completely.  Store in an airtight container until ready to use. (This tasted really good, not too sweet - its also great as snacks). 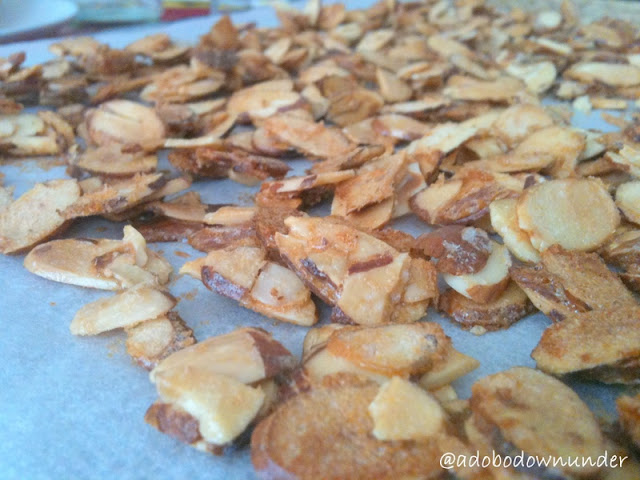 And the last but not the least, the making of the French Buttercream.  This one is a classic icing recipe, which was simply flavoured with vanilla beans.  It is similar to the Italian buttercream icing, but this one uses the egg yolks, instead of the egg whites (as with the Italian buttercream).
5 egg yolks, room temperature
225g caster sugar
60ml water
250g unsalted butter, room temperature
1 vanilla bean, scraped
Place the egg yolks in the bowl of a stand mixer.  Using the whisk attachment, whip the yolks on medium speed until fluffy and light in colour.
While whipping the yolks, pour the water and the sugar in a small saucepan and place over low heat until sugar completely dissolves.
When sugar has dissolved, increase heat to high and bring to a boil until the sugar reaches 114*C (soft ball stage) on the candy thermometer.  (Soft ball stage simply means when you drop a bit of the sugar into water, it forms a soft ball. The link clearly explains all these)
Once sugar reaches this stage, quickly pour into the centre of the whipped yolks and using a hand whisk, whip vigorously to combine.
Return bowl to the stand mixer and continue whipping until the mixture thickens, increases in volume and lightens in colour and texture.  Continue whipping until the mixture has cooled down to body temperature.
Add the butter slowly (a tablespoon at a time) and continue whipping to incorporate.  Continue until all butter has been added, then add the vanilla beans and whip until mixture is smooth.
Use immediately, or store in a container and refrigerate.  When ready to use, thaw the buttercream for at least an hour and whip with smooth.
And now for the assembly.  As with all layered desserts, preparing this takes some careful handling, especially the meringue wafer/dacquoise is crisp and likely to break.
On a large round cake tray, place a tbsp of the buttercream on the base to hold the cake and prevent it from slipping.
Place the first layer of dacqouise/meringue wafer, then spread a thin layer of buttercream, sprinkle some of the prepared sliced almonds, then top with the other dacquoise disc.  Continue on layering - buttercream, almonds, dacquoise.
To finish off, spread an even layer of buttercream on the last discs and on the sides.   Sprinkle and decorate with the sliced almonds.  You can also opt to pipe the buttercream on the sides for a bit of fancy look. 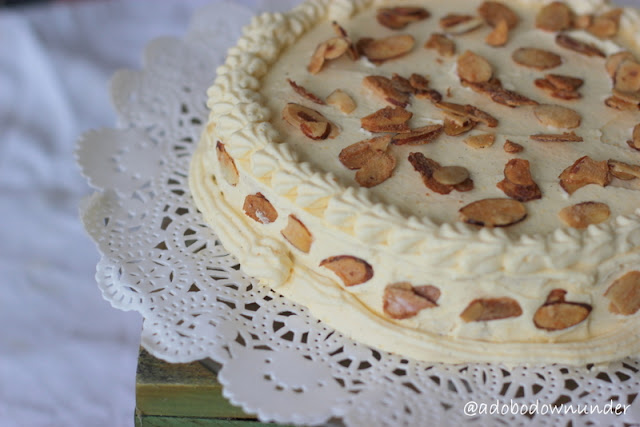 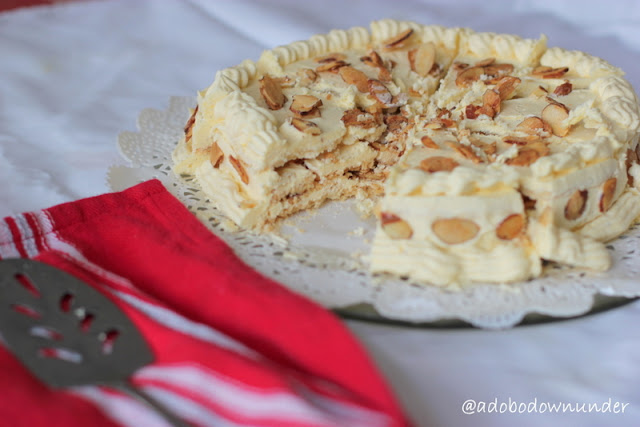 This is a blog hop.  Feel free to click on the thumbnails for more indulgent Layer upon Layer sweet adventures!  A big thanks goes to KC from the Capers of the Kitchen Crusader!