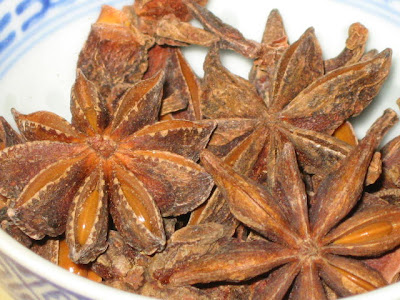 The star anise has been alien to me until we moved here from overseas. Not that they weren't available where I came from. But from the plain fact that we weren't personally introduced. One of the things I learned from moving overseas was to be independent, in the sense where even when it came to challenges, I had to create them myself. Routine can actually kill a person's spontaneity (as if having 4 kids isn't spontaneous enough eh!?), not to mention it can really drag you to boredom. And so, after doing the same familiar dishes over and over again, I gave myself the challenge of embarking on a culinary adventure. And to start, I borrowed tons of cookbooks from the local library. From baking to preparing sushi at home. Now I am a voracious reader. I thirst for new information, but for cookbooks I prefer the ones with the colourful photos as it gives me an idea of what to look forward to.

One of the dishes that my hubby and I both love is the Chinese spicy beef noodle soup. Similar to the Vietnamese pho noodles minus the bean sprouts and the mint, this one is a simple dish but full of aromatic flavours and spices. There is a favourite noodle place we miss in Manila which is called the Northpark (there are several of these but we frequent the one in Banawe in Quezon City). Now because Chinese dishes maybe simple, the ingredients and preparation of Chinese soups are not. A typical stir fry wil only take you less than hour to make - tossing in a few veggies, garlic, onion or ginger and a few strips of chicken or beef or pork, plus soy sauce and voila! You can claim glory for a common Chinese stir fry dish. But their soups and noodle soups are another story. It takes more effort, ingredients and preparation. There is the hours of boiling and tenderizing the meat with an assortment of spices, and then the straining of the broth. Believe me, I've tried it at home, despite the common knowledge that I know I could've just gone to the local shops and got me a take-away for less than $10. But we need to challenge ourselves once in awhile, to shake up our bones and bodies and prove that we are indeed alive. So when I tried to prepare the authentic Chinese Beef Noodle Soup at home, I met the star anise. 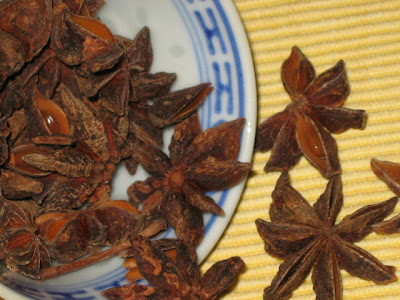 It is a bit intimidating at first as I haven't a clue what to look for. But when I got home with my produce, it was like mana from heaven (well ok, I'm exaggerating just a little bit). The smell and aroma combined with cinnamon sticks is what retail therapy is to a shopaholic. Seriously. I loved the aroma coming from the kitchen! It was authentic Chinese dishon the menu, and I'm walking down the streets in Chinatown.

Recently, I was taken to preparing another favourite of ours, the Korean Kalbi Chim (Beef Spareribs) recipe from the Filipino Kitchen Library Asian Cooking by Aileen Jaraza, Christine Aquino and Hector Jaraza, of which I have done a separate entry here. It was this time that I found the use for the "star" once more. Although the recipe did not call for the herb, I simply included it for the added flavour and aroma. Once more, the star has proven to me its worth. Five stars to you - anise!
Posted by annabanana at 5:00:00 pm