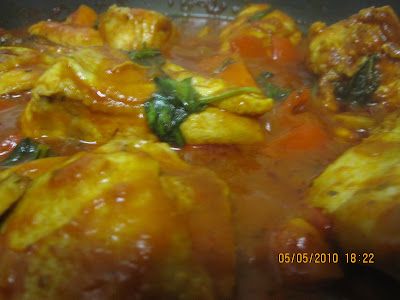 Moving overseas taught me a lot of things. Resilience, tolerance and assimilation are at the top of the heap. In the day to day, it has taught me to seek opportunities and challenges. Even with 4 daughters, there are times when the routine gets too monotonous and boring. And so I seek. Sometimes while driving around, I actually look for that sack of gold coins somewhere, in a corner, in the street I pass through every day. Who knows.
In the kitchen, I've learned to challenge myself. Away from my home country, I started cooking - which I never did back then except for the occasional special event like birthdays and Christmas. But I did love watching cooking shows. From the Lifestyle Channel I loved Wolfgang Puck, Bobby Flay, Ming Tsai, Alton Brown, Jacques Torres, and Mario Batali to name a few. Understandably, mostly American based cooking shows. When we've settled in Sydney, I've met a few - Gordon Ramsay (actually saw him in person during the 2009 Good Food and Wine Show), Pete Evans, Matt Moran, Manu Fieldel and other celebrity chefs.

And so when I started cooking, you'd think I have learned from the masters. Not quite. I would cook whatever dish I knew from back home. Everyday Filipino dishes - Adobo, Beefsteak Tagalog, Beef Kaldereta, Pork Ribs Sinigang, Beef Nilaga/Bulalo, Pork Binagoongan, Chicken Tinola, Beef in Mushroom Soup amongst our favourite pasta dishes - Classic Bolognese, Carbonara, Chicken Mushroom Pasta, Beef Mushroom, etc. When I finally got bored of the monotonous 2-week rolling menu, I thought maybe it's time to learn the risotto's and cacciatores of this world.

And so my culinary adventure began. No one taught me, but I learned to seek - the library and the internet my ally. Google is my best friend. And now, my dish repertoire is expanding, with recipes shared by friends and friends of friends. And the more I learn about new dishes, the more I learn about the similarities in each of the different cultures and heritage that comes with the dish. I never knew for example, that in Tonga and some South Pacific Islands, the Pinoy lechon (Spit roast pig) is also a staple in festivities. And how about similar is the Thai Tom Yum to our very own sinigang stew/soup, our beef kaldereta in so many ways to the French Boeuf Bourgignion and how the famous appetiser "kilawin" is not too far in resemblance to the Peruvian Ceviche. Somehow, despite our massive differences in miles and history and culture and heritage, we can all find a common denominator amongst us. We all just need to get to know each other more. I read this blurb from a cookbook - I forgot whose (either Dorie Greenspan or Julie Goodwin the first winner of Masterchef Australia). I am quoting this from memory (which is a bit hazy but... still the idea is there) "..... wouldn't it be great if once a month at the United Nation's assembly each delegate will demonstrate one or two dishes to cook and share. Everyone will come out of the convention room feeling warm and happy and full to the stomach. Maybe we will then have more policies implemented and understand each other a little bit better". Well, not verbatim but the idea is there. What if?

Julia Child said in her book Mastering the Art of French Cooking that one of the important requirements for learning how to cook is to learn how to eat. "If you don't know how an especially fine dish is supposed to taste, how can you produce it? Just like becoming an expert in wine - you learn by drinking it, the best you can afford - you learn about great food by finding the best there is, whether simple or luxurious. Then you savour it, analyse it, and discuss it with your companions, and you compare it with other experiences."

This simple Chicken Cacciatore, for example is similar to the Filipino Chicken Afritada. But behind the similarities, the experience becomes an altogether different adventure.

I made this dish using the following ingredients:

This is not how most of the cacciatore recipes found online will teach you, but this is a first try and I opted for the basics. This is simple because I did not bake it in the oven as most would require, and used store bought pasta sauce for the extra flavour instead of chopped tinned tomatoes and tomato paste. Eventually, I will find the time to do a Jamie Oliver or Nigella Lawson version, alongside de-boning a duck, and making our own pasta.

Saute garlic and then shallots in olive oil until soft, not burned. Add chicken and shallow fry until brown.

Remove chicken pieces from pan, and cook the vegetables.

Add the chicken back in pan and season with salt and pepper and oregano. Add the jar of Ragoleto Napolitana sauce and red wine.

Simmer for 45minutes to an hour until chicken is tender and cooked through.

Add the basil leaves in the last 5 minutes of cooking.

This was served with rice, for a weekday dinner. 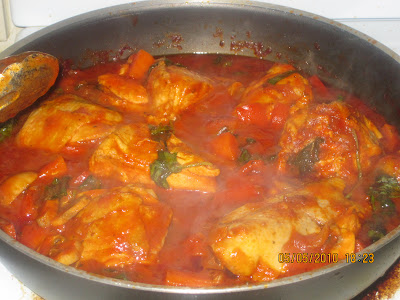