Sugar and spice and everything cupcakes 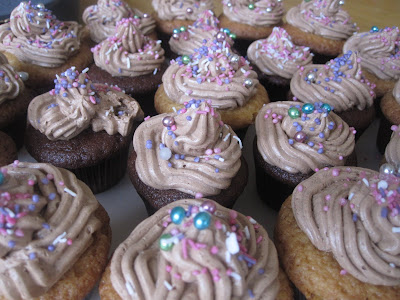 I have been in a cupcake mission for weeks now. Trying on cupcake recipes and frostings at home, for the benefit of everyone. The cupcakes even made it to the Easter mass luncheon at the Filipino community of Our Lady of Dolours in Chatswood. Before I even made it back to our table, the cupcakes (about 3 dozens of them) were swooshed from their container as if a tornado hit that corner of the hall. A bit of prudish smile on my face, but was smeared off when I realised there was no lechon as promised. Nonetheless, I’m just glad the cupcakes were devoured and did not go to waste.

This April school holiday was spent trying on baking recipes – including revisiting an old pandesal recipe. Hoping against all odds it will be as soft and tasty as the ones in the panaderia we’d buy from in Quezon City. Well, turns out its not and I’m sure its all in the physical environment surrounding the preparation. I believe dough rises well in warm conditions and considering it is now officially autumn and chilly, the weather was not much help. The oven must also be a factor, where a small home oven cannot compare in production for those massive ones they use in panaderias. But all hope is not lost. There will be a time and place for the beloved pandesal to be baked in our kitchen soon.

I realised now that while you guys love to help bake, you’re all minimalists like me. You prefer the regular cupcakes with thin frostings, over the piped swirled icings with colourful dots, 100s and 1000s and glitter.

Since my last post, I have been contemplating on the right cupcake recipe from the millions of varieties one can grab online, from cookbooks, past on from friends, families, magazines,newspapers, those free cards as part of the merchandising on shelves at the grocery, from the cereal box - they're basically everywhere. There is a big wide world out there full of these sweet pretty little things. And its endless. Infinite if you may. There must be a cupcake heaven somewhere. And I'm actually only trying to choose the basic yellow (vanilla) and chocolate recipes, including frosting. The main factors of choice are only 2: ease of preparation and convenience in getting the right kind of ingredients (a lot of them call for Dutch processed cocoa). So far, the basic recipes are somewhat all the same, except for a few minor differences, like in some, the addition of sour cream or use of buttermilk while others simply are one-bowl wonders. Over the Easter weekend, we've managed to try 2 recipes from the cupcake kit I purchased recently - basic yellow and chocolate cupcakes, including a chocolate frosting.
I've been to the Cupcake Factory before the Easter break. After I burned the cinnamon rolls, and did a disastrous (as the girls' put it and shall be for another post) Lemon Yoghurt Cake, I had to opt for cute mini Easter cupcakes to give to the girls' teacher Ms. B as an Easter treat.

This is one of the few cupcake recipes we tried in just a week. These were all taken from the cupcake kit I bought online (Cupcake Kit - Recipes, Liners and Decorating Tools for Making the Cutest Cupcakes Ever! by Elinor Klivans) 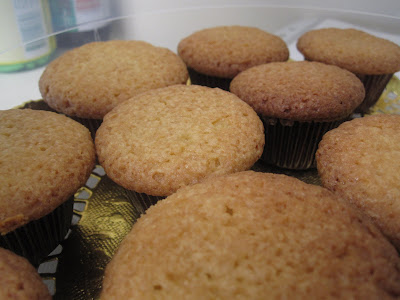 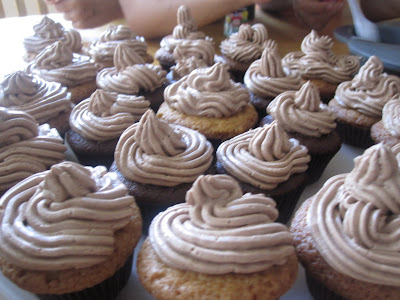 Sift the flour, baking powder, baking soda and salt into a medium bowl and set aside.

In a large bowl, using an electric mixer on medium speed, beat the egg, egg yolk and sugar until thickened and lightened to a cream colour, about 2 minutes. Stop the mixer and scrape the sides of the bowl as needed during mixing. On a low speed, mix in the oil and vanilla until blended. Mix in the sour cream until no white streaks remain. Mix in the flour mixture until it is incorporated and the batter is smooth. The batter is ready to bake or to have nuts, fruit, or other flavourings added.

For medium sized cupcakes, bake at 180 degrees C for about 25 minutes.

Sift the flour, cocoa powder, baking soda and salt into a medium bowl and set aside.

In a large bowl, using an electric mixer on medium speed, beat the butter and sugar until smoothly blended and lightened in colour, about 1 minute. Stop the mixer and scrape the sides of the bowl as needed during mixing. Add the eggs one at a time, beating until each is blended into the batter and it looks creamy, about 1 minute. Mix in the vanilla and dissolved coffee. On low speed, add half of the flour mixture, mixing just to incorporate it. Mix in the buttermilk and blend in. Mix in the remaining flour mixture until it is incorporated and the batter looks smooth. The batter is ready to bake or to have fruit, chocolate chips or other flavourings added.

For medium sized cupcakes, bake at 180 degrees C for about 25 minutes.