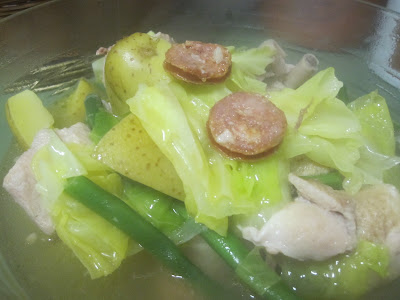 This is Lola Ching's signature dish. If she were right in the Masterchef kitchen, she will be making this dish without a sweat. This is a Vallejo dish which is always a feature during special occasion dinners and lunches - birthdays, Christmas, New Year! When were still in the Philippines, everytime this is in the menu in Cubao, Lola Ching always makes sure that there is a plastic container of this for us take away after every party.

This was our Saturday weekend dinner. And a late one at that. After our Shrek Forever After movie trip.

Pochero is a soup based dish and like the Filipino adobo dish, has so much variety in the Philippines as there are dialects. There is the Pangasinan Pochero where tomato sauce/paste is added making the dish more like a casserole. And the Tagalog version which is the soup/braised meat variety.

The decision to make pochero was to perk things up at home a bit. Dad has been a bit on the grey side lately. Brought by the grey clouds, damp and wet weather of winter. And the obvious fact of middle age. He's not moody as Mum is, but he's been thinking a lot lately, which is not like Daddy at all. When you're all grown up and we look back at this "pochero" moment, I can already see the image of you all laughing your heads off. Yes. Dad usually takes things in stride, and when he's had a deep thought, that means serious business. And while you're all still in your little world, its Mum who's making things work around the house. Which is feat you will realise when you're older.

Meantime, let's enjoy Mum's version of Lola Ching's pochero. I say this is my version because I have excluded the addition of garbanzos (chick peas) for the sheer reason that I'm not a fan of this bean variety. This pochero was made with:


Boil 4 liters water and boil beef until tender - about an hour and half.

Add the pork and chicken half way through cooking the beef.

Once all meat is tender (check by pricking with knife or fork). Add in the onions and continue to simmer for about 20 minutes.

Add potatoes and continue to cook for another 15 minutes.

Add the beans and simmer for 3 minutes. Then add the quartered cabbage, turn off heat and cover. The remaining heat will cook the cabbage.

This is always served best with steamed rice and lemon/calamansi/cumquat slices on the side.