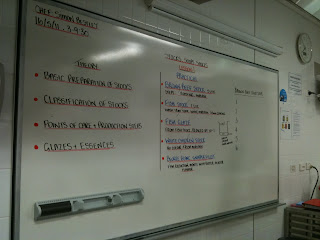 Lesson 2 - Stocks, soups and sauces @ Kitchen 10
Weird as it may sound, I love Mondays.  And mum’s classes at Ryde TAFE just makes it all too easy.  Some people dread Mondays.  Because for them, it is the start of another work week.  Most people come out from the weekend not really refreshed but instead still longing for the weekend to stay.   We all have the same amount of hours given to us in a day – 24 hours each.  No one gets more.  No one gets less.  Its up to us to make the most of it.  And that includes weekends, however long it may be.  On the one side, I think you guys love Mondays too.  It’s the only time in the week that Dad picks you up from school (unless he’s off work of course), and dinner means concocting whatever is appropriate for the day – by that I mean what’s in the freezer or what mum has thawed out and written instructions on.  I find it comforting that because of these Monday classes,  Dad has actually taken effort and time in the kitchen.  Doesn’t matter if its coloured pancakes or corned beef, the positive aspect is the interest into preparing something other than a peanut butter and jam sandwich.  And I thank you guys for that.  Because of your keen interest in the kitchen, Dad and Ate are both slowly grasping the idea that cooking comes before eating, and that not all quick meals can come from KFC or Maccas.  Dad has even requested me to teach him the Beurre Blanc sauce that accompanied the snapper fillet from last week’s lesson.   Food and family does take on a natural connectivity.  If it were not for meals shared in the home or in other places,  how and where else would people connect and share thoughts and laughs and stories and make new memories in one sitting?  That’s discounting the availability of the web of course, as that is putting connectivity out there in the wide world of technology.  No warm bodies there.  While its so different here. At this table.  Warm bodies laughing, sharing a story, arguing, talking, exchanging ideas…. So I hope that when you’re all grown up, you will find the time to get together, share a meal or two, and connect through food!

Today’s recipes were not spectacular.  The exercise was not so much about the core ingredient but focused more on the accompaniment – the sauce!  We’ve  made stocks again today, and I tell you making stocks is a lot of hard work – boiling, skimming, simmering, skimming, skimming, skimming.  And then onto the sieve and paper filter to strain the bones and vegetables.  And the result is a good stock – clear and full of flavour.  Ready to take on the derivatives of the day!
Derivatives (sauces) means they are derived from a previously prepared stock.  (Found this fantastic illustration of sauce derivatives from Canadian Chef and teacher Chef Rohner  thanks to Google).  In the case of today's lesson, the green peppercorn sauce for the rump steak was derived from the demi glace, which was a combination of new ingredients using the previously (last week's lesson) prepared veal stock, in culinary terms half estuffade and half espagnol.
It was quite a surprise to prepare the chicken with red wine sauce.  But it went well with the chicken, so it became a welcome surprise.
The green peppercorn sauce was an absolute delight. The peppercorns we used were kept in a container filled with water.  The peppercorns were soaking in them which I guess is the best way to keep them from drying out as the green variety is picked while young and best kept to preserve their green colour.

And another excitement came when Chef S announced we can watch the Masterclass with Colin Fassnidge from Four in Hand - whom you know from the previous week's episode of Masterchef Australia, where Colin did a masterclass on the humble potato.  At our own masterclass with Colin, he demonstrated how to make a dish which is featured at the Four in Hand pub and restaurant - pig ear schnitzel and some pig tail dish.  He said that at his restaurant, they buy meat in whole and he finds lots of ways to cook every bit of piece of meat.  At Four in Hand they change their menu every week, as he declares, a bored chef is not going be a good chef. 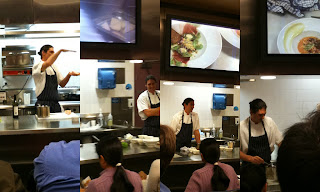 In my mind, mum had her own recipe for pigs ears, and that is the Filipino sisig. Sisig is a dish usually served as appetizer before drinks and is cooked with pig's ears and pig's cheek, and in some cases, including pig's liver.  Served with a drizzle of calamansi (or lemon), it is something that is uniquely Filipino.  I don't know how to make this but in our next trip to the PI, maybe we can go out and have some sisig in one of the most famous restaurants in Manila that is known for this dish.


Going back to the derivatives, for Lesson 2 on Soup, Stocks and Sauces, we made 1) Chicken in red wine sauce and 2) Pan fried rump steak with green peppercorn sauce.
This is based on mum's recall of how we did it in Kitchen 10, as it is not included in the textbook!
To make 1 serve of the green peppercorn sauce,  poura bit of oil and cook half an onion until translucent.

Add some demi glace and 1/2 tsp of crushed green peppercorn.

Deglaze (to deglaze would mean to add some liquid into the pan to dissolve the caramelised bits of food and add these flavour to the sauce) the pan with some brandy and reduce for a minute or until the alcohol from the brandy has evaporated.

Add 1/4 cup cream and simmer while stirring. Turn off heat.  Drizzle on the steak and serve.

1. Season the flour and dredge in the chicken pieces.

2. Shallow fry the chicken pieces for 6 minutes on each side, then place on a plate and set aside.
3. Using the same pan, fry the bacon pieces and onions.
4. Add the button mushrooms and saute, then add the wine.  Simmer and reduce by 1/3 and then add the jus.
5. Bring to the boil, then add the chicken pieces and place a cartouche and simmer for about 15-20 minutes.
6. Take out the chicken and then reduce the sauce further.
7. To serve, place chicken on plate and pour red wine sauce over.
There is definitely room for that peppercorn sauce in our future cooking projects!  So many exciting things to try and create!
Posted by annabanana at 11:01:00 pm