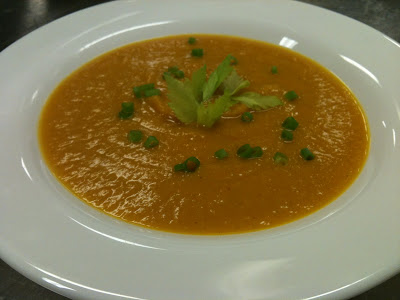 I was excited to take this on as I know Lola Ching has been wanting to make this for some time now. I guess its not the availability of the recipe, but the lack of equipment. Lola Ching has a blender which you guys used to make those watermelon and mango shakes when we were in Manila last Dec 2010 – Jan 2011 which she could easily use to puree the cooked pumpkin. But I’m thinking, she may want the stick blender kind which, for the most part, is tidier than pouring and transferring softened vegetables to a blender and back to the pot with the puree. All in all, I was excited because now, I can share this recipe with her, knowing that I have already tried it and then bring her a stick blender when we go back to Manila in September. Wow. The wait can be that long before this pumpkin soup finds it way in Lola Ching’s kitchen, but who cares. Its something we can keep for years and years to come. Easy as.

This recipe is adapted from our textbook Organise and Prepare Food Methods of Cookery Series 3, with quantities revised to suit the class.

1 quarter (of a whole) pumpkin, cut into big chunks
(Chef D said the smaller cuts will take in more water than needed, so bigger cuts are preferred)

(a bouquet of assorted herbs of you choice. I used some celery stalks, dried thyme, bay leaves and black peppercorns. I think fresh thyme would have given the soup a better flavour)

In the classroom, Chef would usually say something thing like, brunoise the onion, leeks and celery, which in English culinary terms, this means dice the vegetables finely. Generally, the French culinary terms are used in kitchen classroom.

2. Sweat in the butter, then add the pumpkin. Stir for about 3-5 minutes.

3. Add the chicken stock and the bouquet garni. Bring to a boil, then put stove on low to simmer. Soup is ready to be pureed when the pumpkin is soft almost mashed in texture.

4. Pour in a food processor and puree for about 1 minute. A stick blender is also an easy option as you only need to put the blender in the same pot and puree straight.

Serve the soup topped with cream. Or in my case, I just gathered a few celery leaves and some onion leaves. Serve on a chilly autumn night. Or anytime you fancy some thick creamy soup.