In the building where I used to work (Aboitiz Transport Systems Corporation) at Times Plaza Bldg. in Malate Manlia, there is a Le Coeur de France coffee shop where we frequent for those coffee breaks, office gossip and mostly just to catch up with office colleagues from other departments. And of course, there is a favourite from this cafe and that is the chicken pasta salad. It is a cold salad good for lunch.

I do not have a recipe for that salad, but I have somehow managed to replicate it one way or another. The key ingredients are: shredded chicken breasts, carrots and red capsicum. Both vegetables shredded finely. Add some mayonnaise (store bought or home made) salt, and pepper and my secret ingredients for that bite, paprika.
This salad was supposed to have made its way to the Ryde Bulls Womens U14 Family Picnic that did not go through because of the bad weather. But it has kept its dignity in the refrigerator for a week now, and still taste great. These are one of those prepare-now-keep-and-eat-later type of recipes. Great for picnics, at home or those moments when you just want something to eat. 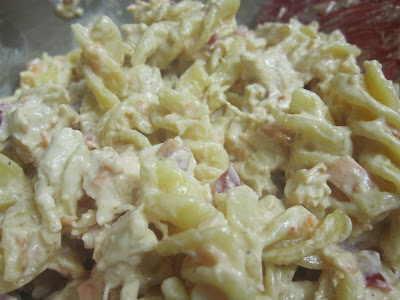 Ingredients in order of importance:

pasta 500g pack, cooked according to directions
(the Le Coeure salad uses the Fusilli type so I use the same)

500g chicken breast, boiled in water with salt and pepper and shredded to bits
(The way I shred cooked chicken breast is by using a fork and slowly peeling away the strands. Or you can cut the chicken into cubes)

1 carrot, shredded (I use a cheese shredder and then chop the carrots some into almost minced bits)

salt, pepper and paprika to taste
(The paprika is just something I add to the salad for the bit of flavour and spice. The Le Coeur salad had those tiny bits of redish spice and paprika is what I thought it was, so I have continued to use it ever since)

1 jar mayonnaise (the quantity of mayonnaise may depend on how you want the salad to be. Add as much or as little, as you prefer.

Combine all ingredients in a large bowl until all mixed through.

Keep in the refrigerator until ready to serve. 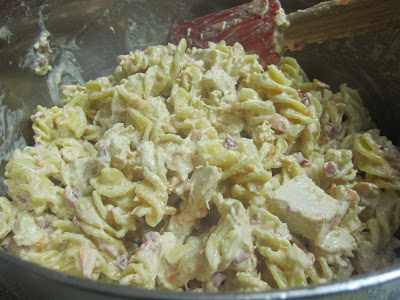